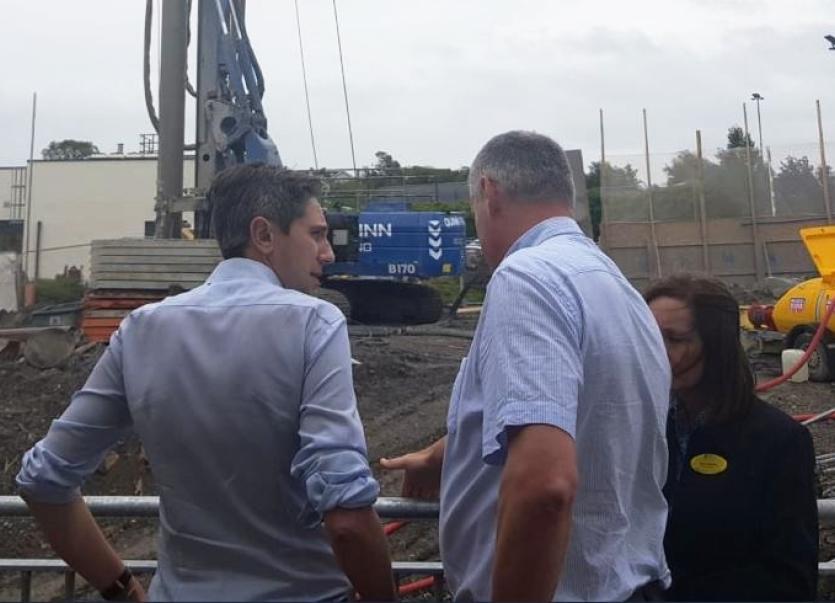 THE COMPANY that was offered a €14m contract to construct University Hospital Limerick’s 60-bed block was the only valid bidder, the Limerick Leader can reveal.

In an unscheduled visit to UHL, Minister for Health Simon Harris visited the site of the new €19.5m 60-bed block.

The only and successful bidder, Western Building Systems, is currently being sued by the Department of Education after it built a number of schools with structural defects.

There has been widespread concern following the appointment of the Tyrone-based company, which has built a number of major hospital developments in the past.

The tender for the crucial bed block was published on the Official Journal of the European Union and E-tenders website on July 26, 2018. The deadline for submissions was September 24.

In late October, it emerged that schools, built by Western Building Systems, were shut down due to structural defects.

This May, the €14m contract was awarded to Western Building Systems, and they commenced work on May 15.

A spokesperson for the UL Hospitals Group said that the original advertisement was viewed by 90 suppliers, with 63 companies accepting the invitation online.

“Given the nature of the project, namely a system build / modular building solution, there are only a small number companies of sufficient scale in the marketplace specialising in this type of construction solution.

“The requirement was actively considered by such companies. Several of them engaged on the project and raised queries during the procurement process. However, ultimately only one valid tender was received within the stipulated timeframe,” the spokesperson told the Limerick Leader this Wednesday.

A spokesperson for the UL Hospitals Group said that HSE Estates followed “strict” guidelines in the procurement process, which was published on official channels on July 26, 2018. “The successful bidder was entitled to bid for the contract and met all the contract criteria.

“The HSE has appointed a technical advisor team who are supervising the contractor’s design and construction works and who ensure compliance with the contract requirements.”

The spokesperson added that this is “an important project” and “will go some way towards addressing the acknowledged lack of bed capacity in the region”.

Western Building Systems, which built Our Lady of Lourdes Hospital in Drogheda among other hospital projects, said it welcomed the Minister’s comments “in relation to adopting a robust partnership approach”.

A spokesperson for the company issued a statement this week, stating:

"We welcome engagement and cooperation with public contracting partners in respect of all such projects, not least to ensure we avoid a situation whereby projects which are deemed to have met contractual requirements and certified as such by Government departments and agencies are subsequently not deemed to be.

"And we welcome comments made by the Minister for Health today on the project at University Hospital Limerick, in relation to adopting a robust partnership approach. We will work with the contracting authorities such as the Health Service Executive in respect of whatever structures they deem appropriate as we have also done up to this point in respect of the school building with the Department of Education.

"In parallel, we will continue to engage with the Department of Education and Skills to ensure the independent report it promised into the schools building programme is delivered with a firm deadline for the publication."