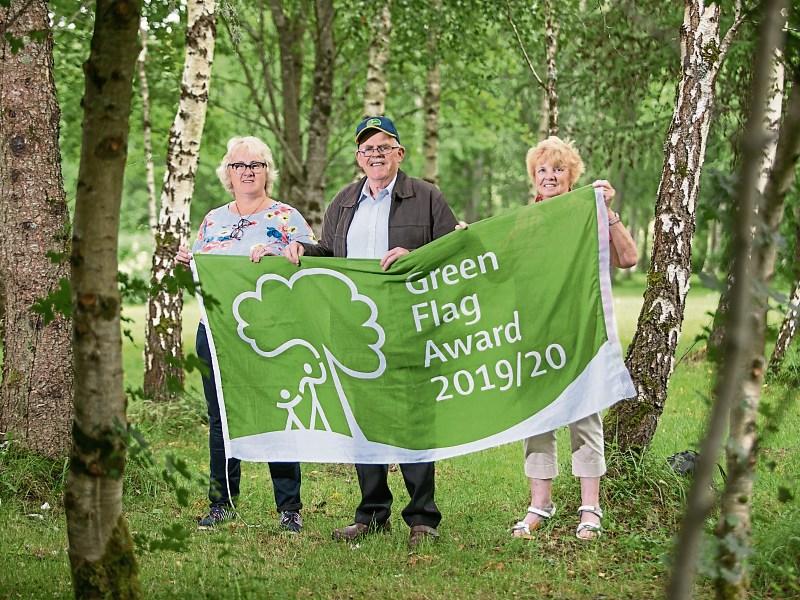 THE Abbeyfeale Town Park has won a prestigious award, and is now one of a small number of public parks and gardens in the country that can fly the International Green Flag.

The significance of the achievement is all the greater given that the Abbeyfeale park has been developed and managed by a local voluntary group over the past two decades and is one of just three volunteer-led sites in Ireland to win the flag.

Other parks or gardens flying the International Green Flag are owned either by the OPW or by a local authority.

For the small band of Abbeyfeale volunteers,  the award is doubly welcome coming as it does as they prepare to mark its 20th birthday.

“Abbeyfeale Town Park has now been added to the International Green Flag Award list of Public Parks and Gardens from around the world deemed to have met or exceeded tough international benchmark criteria for green space management and excellence,” Gerardine O’Brien, secretary of the Abbeyfeale Town Park committee said this week.

The award was made by An Taisce at a special ceremony last week where the People’s Park in Limerick and the Childers’ Park and Woodland in Listowel were also included in the award list.

But, Ms O’Brien said, speaking on behalf of the park committee, what has been achieved in Abbeyfeale would not have been possible without the support and help of a long list of organisations and people.

Maurice O’Connell, chairman of Abbeyfeale Community Council, welcomed the award as a further boost for the town.

“I am delighted for all the people who have worked to make this happen over the past  20 years,” he said.

“This is recognition for everything they have done in that time. It raises the profile of the park and of Abbeyfeale and now takes it on to an international level.”

Earlier this month, Ms O’Brien and other members of the park committee, made a presentation to councillors in the Newcastle West Municipal District asking for funding and backing to revamp and refurbish certain features in the park. They also asked for an annual commitment of money from the council to help maintain the park.

Mr O’Connell said the community council backed that appeal. “I hope this award would be another reason why Limerick City and County Council would help with significant fund-raising for the park.”