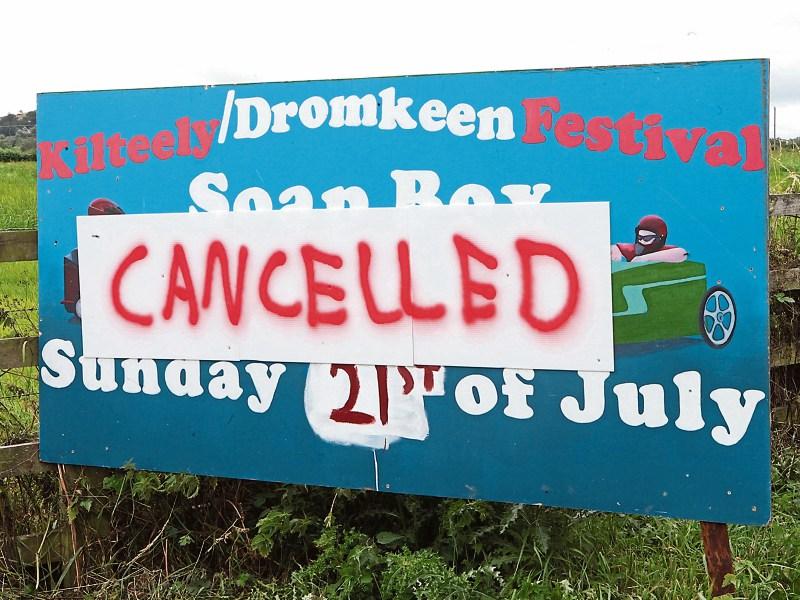 “LOOK, nobody died,” said the chairman of the Kilteely-Dromkeen Festial after they had to cancel their annual soapbox derby due to insurance issues.

But due to the pall of gloom over the parish on Sunday it would be easy to think someone had. Tom Jones said “devastated” would be fair summation of the feeling in the community.

Everything was in place for the eight annual derby in Kilteely until the news broke on Saturday night. The committee issued a statement: “Unfortunately our insurance company pulled out yesterday evening and because of this we regret to announce that we have to postpone/ cancel the soapbox derby. This was not an easy decision to make because much of the community had invested a lot of time and energy into facilitating this event.”

It continued: “We apologise for the late notice but we had been working extremely hard over the last 24 hours to secure an alternative or other solution to the problem. Unfortunately no other solution currently exists but we will find one in time. Driver safety and protection is a key issue and when we cannot guarantee this we had no option but to cancel for the time being. Sorry for the inconvenience.”

Tom said when they first started the soapbox derby they went to a insurance broker in Cork who got them a company to cover the event.

“It was about €700 and that was fine. Costs were going up every year – it was about €1,200 one year. Then somebody said there is an English company that does it,” said Tom. It isn’t Leisure Insure which has departed the Irish market.

“On the day of the derby we register the drivers. You fill out a drop down menu – you put in the event, the name of the driver and then where it is located. When we did a test tun on Friday it said they no longer covered Ireland.

“There was nothing to suggest that we weren’t going to get insurance. We went back to the broker to see what we could do and we got legal advice. I rang the company to see was there any alternatives and it was the looming Brexit scenario. They said they won’t come back to the Irish market until there is greater clarity,” said Tom.

The soapbox derby is the main event of their weekend.

“It brings a ray of sunshine into the village. It brings the whole community and neighbouring communites together. We will move heaven and earth to find a solution for next year,” said Tom. Ironically, it poured rain just before the derby was due to start

The rest of the weekend went off without a hitch with the historical talk and walk, dog show, family fun day, music in pubs and on the street, and the final of Inlaws, Outlaws, Friends and Foes, won by Mairead Ryan and Laura O’Connell, being well attended.

Cllr Martin Ryan said from being involved in the Cappamore Show and knowing the hard work that goes into organising events it was “very disappointing”.

“I read a quote that English insurance businesses are pulling out of Ireland because they think the claims culture here is a basket case. When you see small community organisation effected like that it demonstrates how the claims culture is out of control,” said Cllr Ryan.

“The simple fact is that public liability insurance for the leisure industry is not an attractive business. Not one of the main insurers in the Irish market will provide cover to parts of the leisure industry. The failure of the Government to implement a relentless programme of insurance reform has led us to this crisis point,” said Deputy Collins