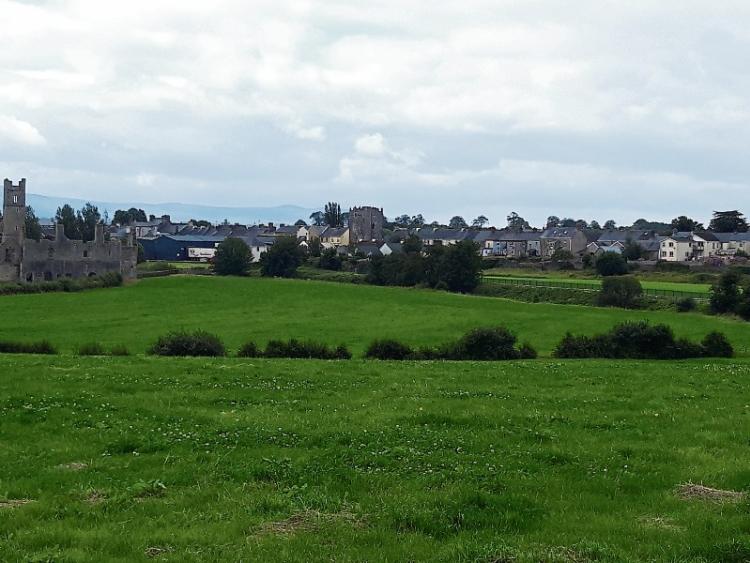 The land next to the priory in Kilmallock

COUNCILLORS have cleared the way for a GAA pitch beside the best preserved Dominican Priory in Ireland.

It changes zoning regulations in a “special control area” where the Priory in Kilmallock, which dates back to 1291, is located. It will facilitate the development of a pitch for Coláiste Iósaef.

The topic was adjourned from last Thursday’s monthly meeting and a special meeting called because it was “too serious”.

Cathaoirleach of Cappamore-Kilmallock municipal district, Cllr Mike Donegan said: “This is a game changer for not alone Kilmallock’s heritage but Limerick City and County Council.”

The original submission to the local area plan came from the Limerick and Clare Education and Training Board (LCETB). It states: “The 3,500 square metre extension of the school has resulted in the loss of open space on the school grounds. The proposed location of the pitch is approximately 56 metres north of the Dominican Priory. Alternatives have been considered and this is the only option that is considered viable for the development of a pitch to serve the school.”

Infrastructure includes goal posts, a ball net and new pedestrian bridge to access the pitch from the school. The LCETB said they will enter into a legal agreement with the council regarding the prohibition of further infrastructure including lighting. Principal of Coláiste Iósaef, Noel Kelly was one of the attendees at the special council meeting.

In response, the council objected to the change to the local area plan.

“Limerick County Council resisted a previous attempt to develop playing pitches on the east bank of the river in 2011. To develop a GAA pitch in the Priory’s landscape would have a very negative effect on the setting of this unique national monument. It would change the land management regime, which would also effect the setting, changing it from its current peaceful, pastoral setting to a manicured , busy setting.”

Cllr Donegan opened the special meeting by stressing it was about zoning and not a planning application.

“We have no input into the planning process. The Priory dates back to 1291 and there is an obligation on us - especially Cllr Carey and myself as the Kilmallock councillors - to offer protection to our heritage. We have made great strides in tourism. We want the local area to benefit Kilmallock economically and for the community.”

Cllr Carey then read out his submission to amend the plan to facilitate the development of a playing pitch for the secondary school in the special control area.

“It is in the interest of an active lifestyle and student well-being,” said Cllr Carey. This was seconded by Cllr Eddie Ryan and supported by Cllrs Mike Donegan, Brigid Teefy, Martin Ryan, Ger Mitchell and John Egan.

The changes to the Kilmallock local area plan will go on public display in council buildings in Kilmallock and Dooradoyle on August 3 for four weeks. The public can only make submissions on the amendments. The plan will then come back before members at the October meeting.

Speaking afterwards, Noel Kelly, principal of  Coláiste Iósaef, which currently has no playing pitch, said it was a “very positive outcome”.

He thanked local councillors and the LCETB for their “hard work and consideration for the future of the town and the well-being and health of students”.