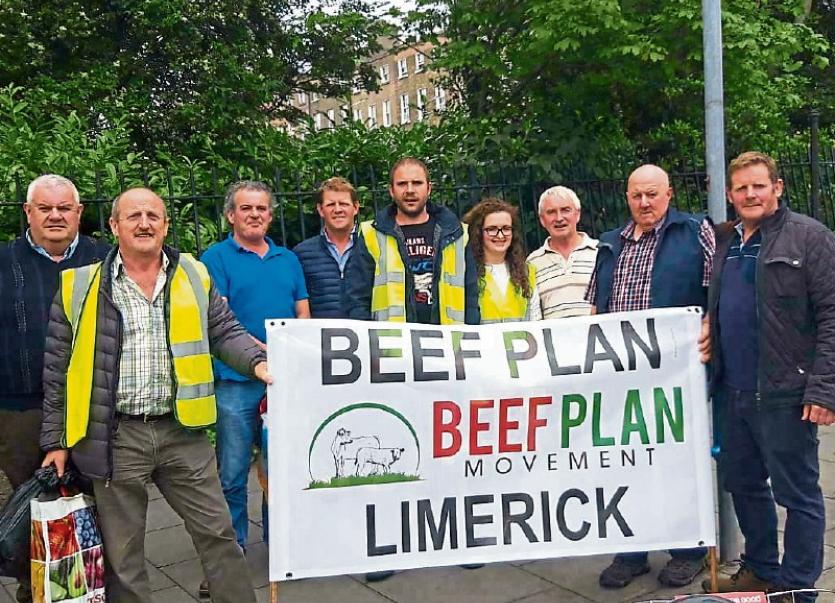 OVER 150 travelled from County Limerick to the Beef Plan Movement’s Mercosur  protest in Dublin this Wednesday.

A mound of wellingtons were left outside the gates to the Dail with the sign “no longer needed”. 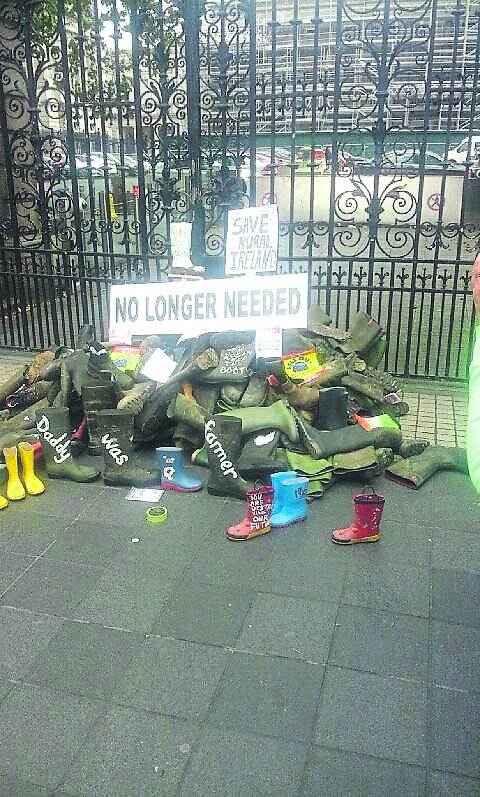 The protest was against the upcoming Mercosur deal which will see an extra 99,000 tonnes of beef imported into the EU from the Mercosur countries.

It would also see the four Mercosur countries - Argentina, Brazil, Paraguay and Uruguay - slash tariffs on products coming from the EU like cars, cheese and wine.

Limerick Beef Plan chairman David Murphy stated that it was very encouraging to see so many farmers make the journey to Dublin.

They were joined in solidarity by Deputy Niall Collins who said: “Farming is the lifeblood of rural Ireland and County Limerick. If this deal comes to pass it will be a case of the last person in the countryside to turn off the lights.” Deputy Collins backed his Fianna Fáil colleague, Agriculture spokesperson  Charlie McConalogue, who is  calling  on the Government to immediately request a full impact assessment of the Mercosur deal on the beef sector, in all Brexit scenarios.

Limerick Beef Plan provided a bus to the capital where they were joined by thousands of farmers from all over Ireland. Mr Murphy, a suckler farmer from west Limerick, said this deal is “completely unacceptable to farmers”.

“It is total hypocrisy to hold European farmers to the highest environmental and food safety standards while importing beef from countries where their standards are questionable.

“The environmental impact of felling of rain forests at a rate of 200,000 acres/day coupled with the air pollution associated with shipping almost 400,000 tonnes of beef (which is the equivalent to the emissions of approximately 14 million diesel cars per year) is shocking. Meanwhile, Irish farmers are subjected to intense environmental restrictions and regulations,” said Mr Murphy.

With beef prices currently at 3.60 Euro/kg the impact of importing more beef into Europe will be catastrophic, he said.

“Prices will crash further as the market is already over-supplied. During the protest farmers piled pairs of wellies at the Dail entrance.

“The message was that farmers may as well hang up their boots if this deal goes through.

“The beef sector is worth almost €3b annually to the Irish economy. It is essential that our government does what is best for Irish people and reject this deal,” said Mr Murphy.

He also pointed out that it is not only farmers that will be negatively impacted by this deal.

“Vets, shops, post offices, feed merchants, farm suppliers and hauliers as well as many more businesses will feel the impact of a collapse in the beef sector. This is not just a farmer protest, it is a rural revolt.

“This deal is unpopular right across Europe with several protests held in France in the last week. The EU produces nearly 8m tonnes of beef so we should have ample support from the continent as this will effect all beef farmers in Europe.

“Our Government needs to take on board the message delivered to them at the protest this Wednesday and reject this Mercosur deal,” said Mr Murphy.

Meanwhile, Minister for Agriculture Michael Creed said the Mercosur trade deal must not be spoken about as if it is a done deal.

Read also: County Limerick farm across the road from previous record sale is now up for auction