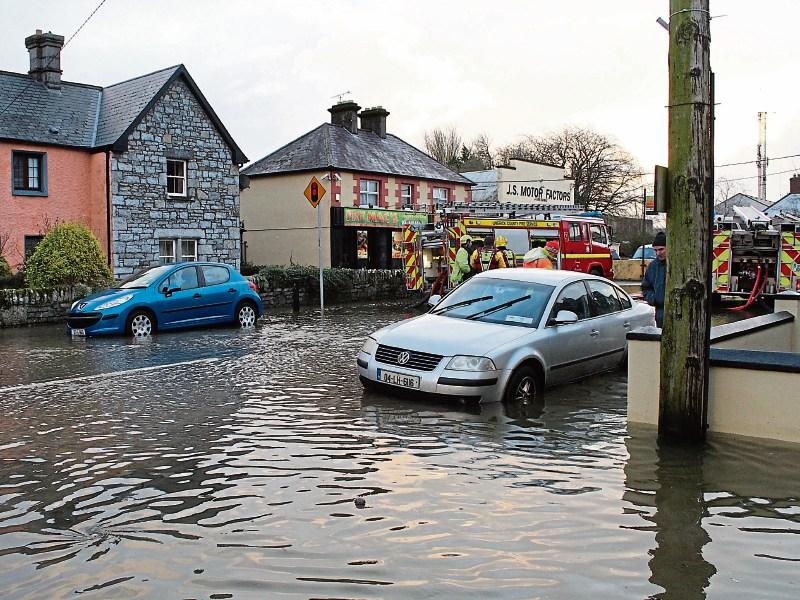 IN the first meeting of its kind, all the state bodies with responsibility for Foynes have come together in a bid to hammer out a cohesive approach to prevent future flooding in the harbour village.

“The meeting held in Foynes was extremely positive with each group and public body playing their part,” said Minister of State, Patrick O’Donovan who called the meeting which took place in Foynes last week.

“As a result of the initial meeting, Irish Water, Limerick City and County Council and Coillte are now working together towards the most effective way to clean sections of the twin pipeline associated with the Foynes-Shannon Estuary Water Scheme.”

“Flash flooding has been an intermittent but serious issue for the town of Foynes,” Minister O’Donovan said, explaining why he was prompted to host the round-table meeting.

“While a €2.3 million tidal defence barrier built in 2016 provided reprieve from tidal flooding during storms and large swells, there remained on going concern about potential flooding from another source, and from blocked pipes and culverts.”

The most recent flash flood which occurred in  2017 proved the concerns were not without foundation, Minister O’Donovan added. That particular incident he pointed out caused devastating damage to a prime tourist attraction, the Foynes Flying Boat and Maritime Museum and other businesses.

“As Foynes has a long and varied history, it is often difficult to ascertain which public body is responsible for different elements of the water and flood relief infrastructure. This is particularly frustrating for the townspeople, business owners and community organisations who fear further flooding if the infrastructure is not carefully cleaned and maintained,” he continued.

“It therefore became clear to me that the best course of action was to invite all of the bodies to meet so that a cohesive plan could be put in place, that would see all public bodies working together,” added Minister O’Donovan.

The immediate outcome has been the decision for three bodies, Irish Water, the local authority and Coillte to work together on a plan to clean the twin water pipeline.

Meanwhile, Minister O’Donovan has also announced funding of €128,000 to carry out coastal and flood protection works at Foynes Yacht Club.

The announcement came this week from Minister of State Patrick O’Donovan who said he had worked with the club and with Minister Boxer Moran to get funding for flood defences at the club.

“ In recent years a lot of damage has been caused due to a number of storms which has seen the Shannon erode the bank of the club,” Minister O’Donovan explained. "I impressed upon Minister Moran the need for funding for this work, as the club is a very important local amenity in Foynes. The club is used by the whole community and prides itself in reaching out to everyone.”

The funding of €128,025 will be made to Limerick City and  County Council who will arrange for the work to be carried out.

Read also: Tom praises the kindness of strangers after fall in Limerick city