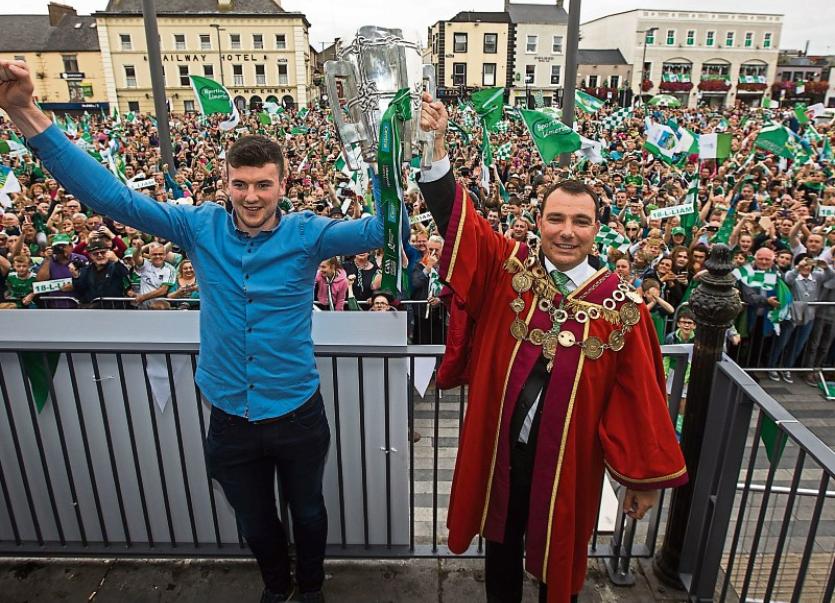 OUTGOING mayor James Collins has admitted he felt a little “stymied” during his year in office – and could have done more with executive powers.

Limerick has become the only city in Ireland to approve plans for a directly elected mayor with executive powers on a five-year term, something the Fianna Fail councillor – who will end his one-year first citizenship on Friday – welcomes.

He admitted a year is simply not long enough for a mayor to put their stamp on matters.

“A directly elected mayor should have executive functions, and I hope we get what we voted for. And also, it’s a five year term so it would allow you to be more strategic in what you do. My target when I was there was to influence planning, policy and public debate. I wanted to put some of the building blocks in place,” Cllr Collins said.

There are two big issues Mayor Collins would have liked to have had more of a say in: planning and transport in Limerick.

“Some of the decisions made really frustrated me. For example, the granting of planning in Irish Cement in Mungret. The correspondence we have been sending to the EPA to not allow them incinerate toxic waste in our neighbourhood. It doesn’t fit in with any of the plans.”

“One of the things which has generated huge public debate – and the Limerick Leader has highlighted this as well – and became a local election issue is the public transport system. We brought Bus Eireann in, Transport for Ireland, and told them the routes were not satisfactory, the timetables weren't satisfactory, the punctuality wasn’t what it should be. But we couldn’t change it,” the mayor explained, “The local authority doesn’t have power on it, which is frustrating.”

Executive mayors across the world have power over transport provision, while the management of hospitals – also a huge issue in Limerick – is also a devolved issue.

Mayor Collins hopes the advent of a directly elected first citizen will pave the way for local control of these matters.

Venturing to suggest to Cllr Collins that he is perhaps making his own pitch for one of the top jobs in Limerick, he says, although people have held up his year “as an example" of what can be achieved with an executive mayor, there are other priorities.

“I would love to see a directly elected mayor with executive functions and for the local authority’s scope to be widened. At the moment, I’m a candidate in the general election. So that may come along sooner rather than later. There’s a lot going on with Confidence and Supply, with Brexit, and Budgets. The elected mayor is a wait and see,” he said.

When one recalls Mayor Collins’ term in office, it’s impossible not to recall those scenes of unbridled joy in August when Limerick’s hurlers became the All-Ireland champions for the first time in 45 years.

Mayor Collins stood outside Colbert station alongside the victorious panel and symbolically received the Liam MacCarthy cup from captain Declan Hannon on behalf of the people of Limerick.

It was the day after the one-point win over Galway, which he described as “just magical” – it was his birthday to boot!

“I spoke to Declan [Hannon] on the platform when we got off the train. I said ‘listen, be ready, there’s a huge welcome for you here’. He looked at me, and didn't say much. I spoke to him afterwards, and he said when the doors opened and they came out, they were blown away by the welcome,” he said, “It was huge: Limerick really came out to welcome home their heroes. And I was delighted to welcome them home, and help co-ordinate a homecoming party for Limerick to celebrate their success.”

The party continued for days and weeks after, and there was a personal spin-off for the mayor: for his son Daniel, 12, picked up a hurley for the first time.

“I asked him at Christmas what he would like, and he wanted a hurley and helmet. He took up hurling, and ended up playing in a schools’ final last week,” he smiled.

With a start like that, it is no surprise sports formed a bedrock of Mayor Collins’s year in office, recognising many sports clubs.

“We forget sometimes how special it is, to invite people to City Hall and to recognise their achievements. We had sports stars in from the Transplant games, minority games. I went out and met different groups in different sports. I spent time with the camogie stars, I met students to talk about how to promote Limerick sports. We had awards for the likes of Vicky Phelan, the 1978 Munster team, Roisin Upton, the Limerick Ladies Footballers, Aaron Tier and Ciara Neville,” he recalled.

At the start of his year in office, Mayor Collins highlighted improving the quality of life in Limerick as being one of his main challenges, his campaign slogan being: ‘Live in a city which works for you’.

“There was disappointment last year when Limerick lost out on a major concert that went to other cities. I pulled together some of the key stakeholders in Limerick to see what we could do to turn that around. We had some successes: the National Geographic Symphony for our World took place in the Gaelic Grounds and just last weekend was Live at the Docklands with Dolans,” he said.

These events were achieved thanks to a refundable contribution scheme put in place by the council, a move which allowed the local authority to afford a low-interest loan to a concert promoter to get gigs off the ground.

Mayor Collins acknowledged he has had a very busy year (“the busier I was, the busier I got”, he says).

But he wouldn’t change it for the world.

“It is a full-time role. It’s a busy position. It’s very rewarding, it can be challenging. But it’s a huge honour and I was very humbled to be elected as mayor and serve my term. It’s been a special year,” he concluded.