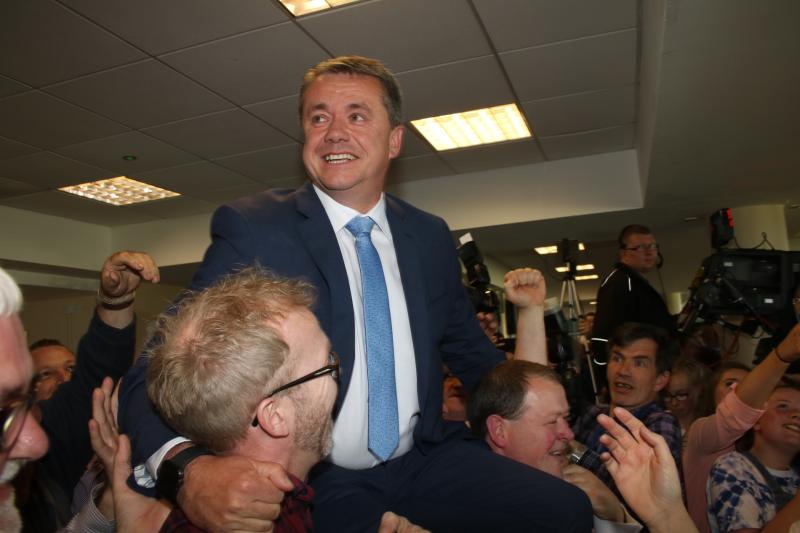 INDEPENDENT Brigid Teefy has been elected to the first seat in the Cappamore-Kilmallock municipal area and has topped the poll once again.

The Ballybricken woman who actually votes in the Adare-Rathkeale area secured a stunning 2,420 first preferences. First-time candidate Martin Ryan from Cappamore has been elected to the second seat. The Fianna Fail man polled a huge first preference of 2,157.

There was huge excitement as Cllr Teefy and Cllr Ryan were lifted high in the air by their supporters. It is a remarkable achievement by both as Cllr Teefy actually lives in the Adare-Rathkeale area so she or her family and neighbours can't vote for her.

Brigid Teefy, Ind, gets a hug after her stunning performance to top the poll for a second time in Cappamore-Kilmallock pic.twitter.com/T9uVVgzCRW

While Cllr Ryan is a first time candidate. But the Fianna Fail did a serious canvas with around 80 on his team.

Cllr Ryan said he couldn't believe his vote. And while there are celebrations planned later he says the "work starts now".

Cllr Teefy was equally stunned as she feared that she could lose her seat yesterday morning. She received a lovely note from two of her grandchildren which said: "Well done".

Cllr Teefy's surplus of 515 votes will now be distributed.