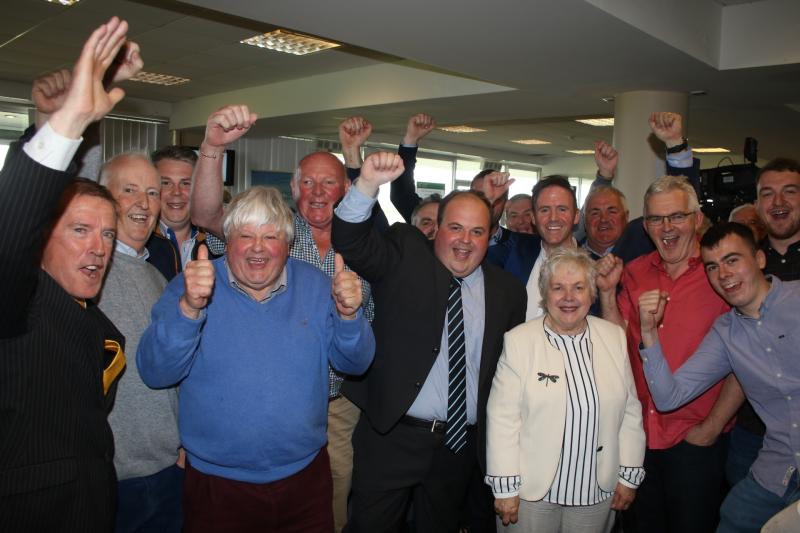 THE POLL-topper in the Adare-Rathkeale area, Adam Teskey says he is very humbled by the level of support he has got on his first hustings. The Fine Gael candidate clocked up 2,459 first preference votes, nearly 700 votes above the quota of 1,775.

He is, he says, encouraged by the vote which is sending him back into the council with a large mandate. (Cllr Teskey was co-opted to the council following Tom Neville's election to the Dáil in 2016.)

"I am looking forward to building on that foundation and to delivering to the people into the future," he said.

His party colleague, Cllr Stephen Keary, who received 2082 votes was also elected on the first count with an increased vote. "I am extremely humbled. It is a fantastic vote," he said. “I fought a hard campaign, and a clean campaign for the last three months. I am humbled to be elected for the people of Adare Rathkeale. “

He congratulated his colleague Adam Teskey on his poll-topping achievement.

Independent Richard O'Donoghue, who is just 24 votes short of the quota, is likely to be the nxt candidate to be elected.
Cllrs Emmett O'Brien and Kevin Sheahan are also expected to be elected but the final seat will be a fight between Fine Gael's Leo Walsh and one of two Fianna Fail candidates, either Bridie Collins or Trina O'Dea.
Green Party Theresa Storey polled 538 votes, not enough to join the green wave around the country but she is a happy candidate.