Limerick village's 'Great Wall' is up for an award 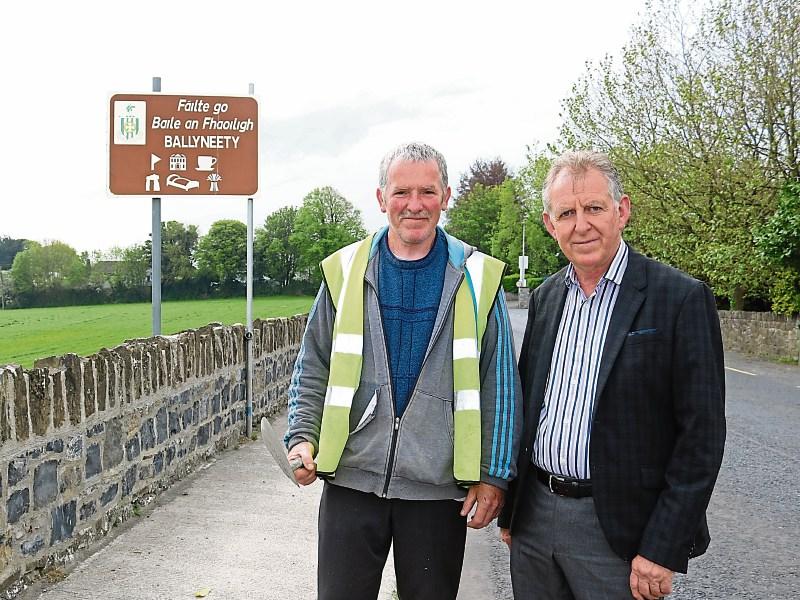 THE SAYING goes that “If you build it they will come” and judges could be on their way to Ballyneety.

The wall on the Limerick side of the village has gone from being an eyesore to being nominated for a national award. It had collapsed in places and looked terrible. But thanks to the local community and council it has been restored and runs for almost one third of a kilometre.

Cllr Michael Sheahan said he was contacted by members of Donoughmore Knockea Roxborough Community Association and asked if he could assist them in having it restored.

“Their problem was that while they had the personnel able to rebuild the wall they didn’t have the finance to provide the necessary materials,” said Cllr Sheahan, who contacted local engineer John Sheehan.

“We arrived at a solution whereby Limerick City and County Council would provide the stone material and the local stonemasons employed on the Donoughmore and Fedamore CE scheme would rebuild the wall. The final result is a superb piece of craftsmanship. The stonemasons responsible for this restoration work are the Condon brothers – Joe and Michael from Fedamore. The restored wall is a testimony to their great stone masonry skills. It very much enhances the entrance to the village of Ballyneety,” said Cllr Sheahan.

The Fine Gael man believes it should be put forward for an All-Ireland Community and Council Award such is the excellent standard of workmanship involved. “It is a perfect example of community and council working together,” said Cllr Sheahan.

John Keane, supervisor of the Donoughmore and Fedamore CE scheme for 28 years, oversaw the work. He said the wall is 320 metres in length. Mr Keane praised the Condon brothers, and felllow CE staff, who worked for nine months in rain or shine and right beside the constant traffic on the busy road.

He thanked the council, Cllr Sheahan and Donoughmore Knockea Roxborough Community Association. Mr Keane also paid tribute to the landowner Mr Buckley; Bernard Grogan and his son Stephen who gave the loan of their yard for the stone; John Sheehan, chairman of Donoughmore Knockea Roxborough Community Association; council overseers Sean O’Malley and John O’Dwyer, and former councillor Eddie Wade for all their assistance.

Joe Condon said there is a sense of pride whenever he passes by his handiwork.