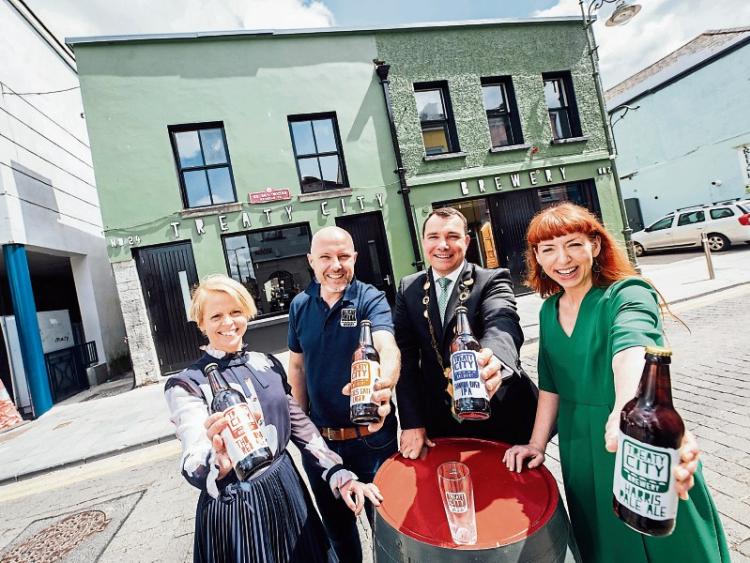 A NEW artisan craft brewery has opened as a unique tourist attraction in the heart of Limerick’s Medieval Quarter.

Limerick’s very own beer company, Treaty City Brewery has transformed two previously derelict buildings on Nicholas Street, with links to Limerick’s 18th century brewing industry into what is being billed as “the ultimate craft brewing experience”.

The firm was awarded the lease of 24 and 25 Nicholas Street as part of Limerick City and County Council’s strategy to revitalise the thoroughfare while preserving the built heritage in the area.

Through the craft brewing experience, visitors will discover Treaty City Brewery’s hands-on brewing approach while also learning about the history of the building and brewing in Limerick which dates back to the 1700’s.

Historical records show that Number 25 was once the home of Arthur Roche, the three-time mayor of Limerick, who operated his own brewery at the rear of the building up until 1756.  Indeed, brewing was once a thriving industry in Limerick’s Medieval quarter.

One of the first breweries in the south of Ireland, The City Brewery (also known as the Newgate Brewery) was founded in 1739 and situated in Newgate Lane, between the old City Gaol and King John’s Castle.

Treaty City Brewery will also use the micro-brewery as an experimental and innovation hub to develop new beer recipes which will compliment its large scale production facility.

Mayor James Collins said: “The addition of the Treaty City Brewery on Nicholas Street will greatly enhance the tourism offering in the area. It’s heartening to see local businesses being part of the revitalisation of the historic core of the city, and this will hopefully act as a catalyst for further inward investment into the area. The return of a craft industry such as brewing is particularly apt and appropriate, and resonates very well. I would like to wish Treaty City Brewery every success.”

Stephen Cunneen, the managing director of Treaty City Brewery, added: “This is a very exciting and significant time for our business; not only are we expanding our offering and our research and development capabilities, but we are playing a key part in the rejuvenation of Nicholas Street in the heart of the Medieval Quarter. Through the sympathetic development of the micro-brewery in this historic part of our city, we’ve created a unique and authentic visitor attraction that pays homage to a craft that has been much loved throughout the centuries.”

Numbers 24 and 25 have been sympathetically fitted out to reflect the period architecture of the buildings. Antiques from across Limerick city and county have been sourced.

The brewery open six days a week and tours will run regularly.