Turf war breaks out in Limerick as candidates' posters 'disappear' 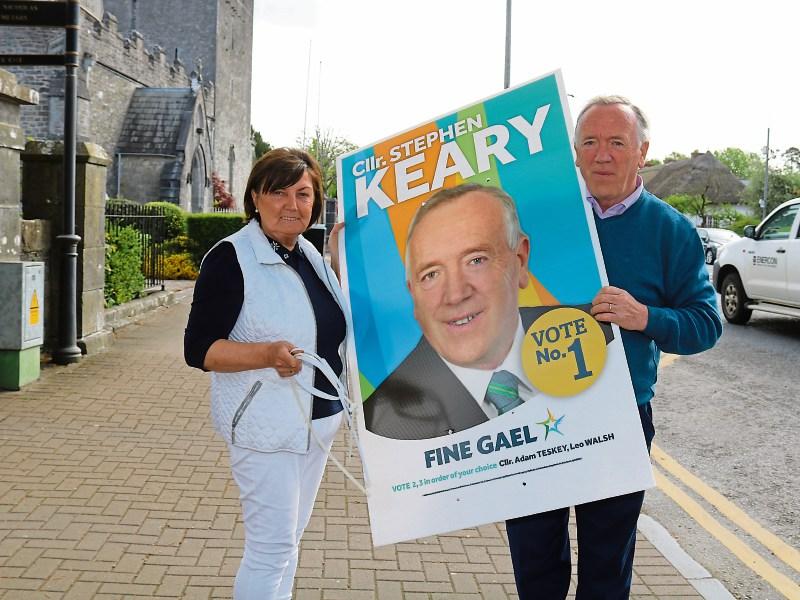 Cllr Stephen Keary, pictured with his wife Bridie, reckons some 75% of the posters he put up have now disappeared

FINE Gael candidate in Adare Rathkeale, Cllr Stephen Keary, reckons at least 75% of the posters he put up last week have now been taken down and destroyed.

“I put up 200 posters,” he told the Limerick Leader this week. “I would say I now have maybe 40 left in place. The posters taken down were in Rathkeale, Croagh, Ballingarry and Adare, areas where my core vote is.”

Cllr Keary, who is hoping to retain his seat in the six-seater Adare Rathkeale Municipal District, was one of the first out of the blocks last week when postering for the local elections on May 24 became legal.

There was some damage done to the posters by Storm Hanna on Friday night but the majority of them were fine. But, of the 13 he put up in Ballingarry for example, only five remained on Tuesday morning.

And he is convinced the vandalism is politically motivated. “It is ironic that where my posters have disappeared, posters of another candidate have appeared.”

“I am hoping they will investigate the matter,” he continued, pointing out that there is CCTV in  a number of the towns where the damage was done and he is hopeful an examination of footage will reveal the culprit or culprits.

“I got great support putting up those posters,” Cllr Keary continued.. “I can’t go back and ask them to do it again.”

He now intends to try and acquire some more posters but this will add to his election costs. And, as he pointed out, all candidates are limited in what they can spend.

It is not, he explained. , the first time he has suffered poster vandalism. In 2014, posters were also removed. “It was focused mainly in Adare at that time.”

This time round, the damage is much more widespread and costly, he says.

There is a similar mystery in the city after two first-time local election candidates in different  Limerick city districts discovered that their election posters have disappeared in recent days.

Social Democrats local election candidate in Limerick City West Elisa O'Donovan contacted gardaí this week after she discovered that €900 worth of her posters disappeared over the weekend.

And while some election posters were certainly blown away during Storm Hannah, “the storm can’t snip cable ties and is unlikely to leave a poster in near perfect condition,”' said Olivia O’Sullivan, a first-time Fine Gael candidate.

While it is understood a number of local election posters were removed by the ESB in the Dooradoyle area this week, neither candidate had placed their posters on ESB poles.

Ms O’Sullivan recovered more than 20 of her posters spread across her district of Limerick City North. “We definitely lost a couple due to wind damage.”

“They were pretty battered and had been torn from their poles.”

However, her team found the majority of her missing posters in various locations near Caherdavin. They were perfectly intact, with their cable ties still attached to each one, she explained.

“We recovered 21 posters in total, and there was probably about 30 in total that came down. We were able to put the majority of them back up, which will tell you what kind of condition they were in.”

When asked if she believed her posters were deliberately removed, Ms O’Sullivan said: “I wo- uldn’t know, and I don’t have any evidence of a crime.”

“I haven’t been in a campaign before and I am new to this so I guess I don’t know how much of it is par for the course or how much of it would be unusual treatment. We just got on with it.”

“Posters are very important for first time candidates, unfortunately,” Ms O’Sullivan said. “If you don’t have your posters up and everyone else have their posters, then you are at a disadvantage.”

Meanwhile, on the opposite side of the city, Elisa O’Donovan discovered that 30 of her posters, which were on display between Punches Cross and Mungret, also disappeared over the weekend.

Read also: External review into Limerick trolley crisis 'a smokescreen to hide from the real issues’

“My team didn’t put them up on ESB poles because we know there is a risk. We put the posters up on the official places where we are supposed to put them up,” Ms O’Donovan said.

“I am not a fan of posters, I would prefer not to be using them but I am a first time candidate they are sadly just a necessary evil.”

“We did report it to Roxboro [Road Garda Station] because we felt this wasn’t due to the storm and a lot of fundraising money went into getting those posters. People put a lot of time and energy into fundraising for us.”

“You can very clearly see when a poster was taken by the storm because the cable ties were left on the lamp post,” she added.

“We walked around and cut those off but there were times when we saw just the one cable tie left on the post and to me it does seem suspicious.”

“I just really hope it isn’t anything malicious,” she added. “I am trying to stay away from that element of politics because I don’t think it really helps anyone.”