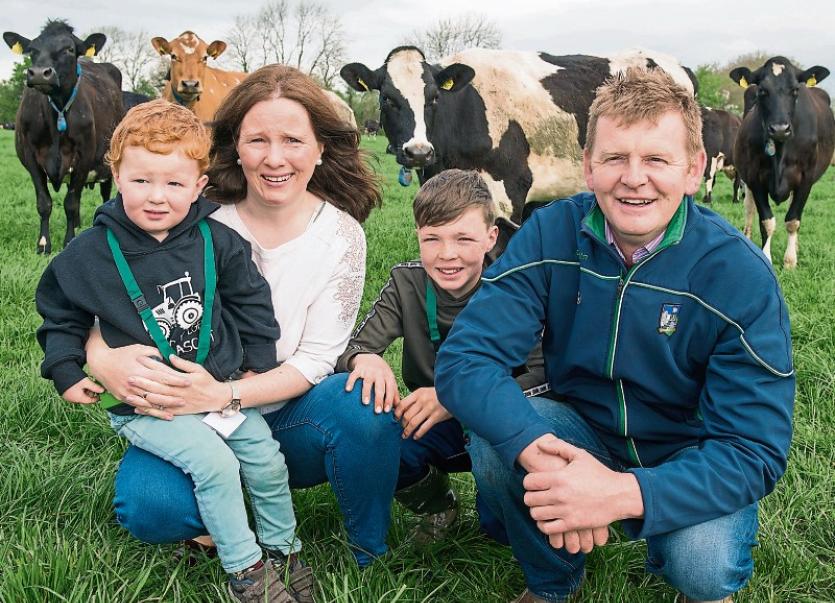 John and Olivia MacNamara, pictured with two of their children Conor and Padraic at the farm walk they hosted for Teagasc

IN THE run up to last Wednesday’s farm walk, John MacNamara was asked what he would like people to take away from the event.

The 2018 Irish Grassland Farmer of the Year said he hoped people would see that they are operating a very simple, efficient system. Any sports coach will tell you that it is all about doing the simple things very, very well. Coincidentally John is on the management team of the county U14 ladies football team as well as being heavily involved with Knockainey Ladies Gaelic Football Club.

Over 1,200 attended the event on John and Olivia’s farm in Knockainey.

“I was delighted that such a crowd came to support us and to congratulate us. It’s quite daunting when you open up your farm nationally but I think we had it fairly well planned. The weather was a big bonus to us.

“Once you are organised the day would normally run smoothly enough. I would have found one or two of the questions daunting but you have to deal with that to win the competition,” said John, who thanked Teagasc employees, his own staff and family for organising the national event.

“It was very long days before it. A couple of lads who previously worked came back to help me the day before. I hadn’t even asked them. That has to be acknowledged.”

“The lads all had jobs to do on the day. They were flying about the place,” said John.

Read also: County Limerick farmer over the limit on the morning after Munster final

As people headed home from the walk John hoped that they took with them “the importance of measuring grass and then the value that grass can add to a dairy business”.

They also would have seen an immaculately clean farm. You would need white gloves on to find a speck of dirt, indeed, hardly a blade of grass is out of place.

“I feel that it is very important that everyone should feel pride in what they do, whether it’s a clean yard or whether its a tidy place. At the end of the day we are all producing a consumer product. It’s important that the consumer sees that their milk comes from a clean and tidy farmyard.”

There was also a fundraising aspect to the day. Knockainey Ladies Gaelic Football Club ran a shop. Breda McGuinness, who is on the management team of the county U14 ladies football team with John, organised a charity football skills game. A number of the panel supported the event for Milford Hospice. AIB Kilmallock topped up the money collected and a cheque for €450 will be given to the good cause.

“Over a long number of years I have benefited greatly from people that have helped me, right as far back as Tom Shanahan and the late Denis Crowley. I would have been very grateful to those who helped me throughout the years so what I’m trying to instill in the girls is the importance of trying to help someone else as well - that it’s just not all about football,” said John.

And it can’t all be about farming either says John, who stresses the importance of off-farm pursuits. But those who put into practice what they learned at the MacNamaras’ open day won’t go too far wrong.

It was supported by Teagasc, Dept of Agriculture, AIB, Farmers Journal, Grassland Agro and AIB.