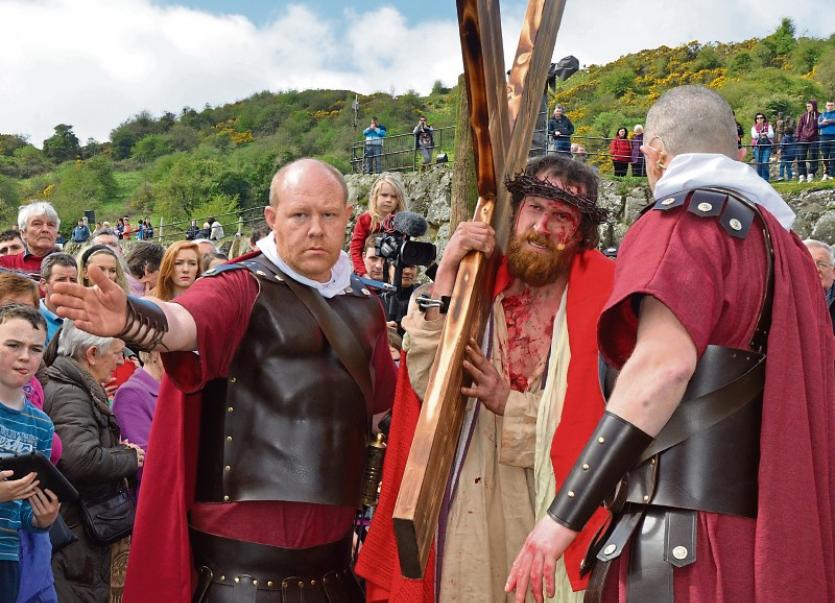 A scene from Pallasgreen's The Passion featuring Gary Fraher as Jesus

FIVE years ago the community of Pallasgreen and Nicker made national headlines for their depiction of the Passion.

Six months of work, under the watchful eye of Eamonn Harty, went into the recreation over 24 hours. Garry Fraher put his body and mind on the line in his portrayal of Jesus.

The Passion was filmed over a three week period and later aired on RTE. An estimated 5,000 descended on the small village in Easter of 2014. The heartfelt performance of the cast will be forever etched in the memories of those who attended.

Who will forget the basket fires, the wonderful grotto, the haunting and beautiful music, the 100 piece choir singing their hearts out at 2am, the costumes, the Roman soldiers on horseback. It had an emotional connection with the audience and profoundly affected some. The Passion was Eamonn Harty's idea and he brought it to life. It was percolating in his mind for 22 years.

“I think we completely exceeded, not only our own expectations but the expectations of everyone who came to witness the event. Everyone was pushed to the limit and we wanted people not to just come, watch and listen, but to actually feel part of it. I think we achieved our goal,” said Eamonn this Easter week.

Over almost 24 consecutive hours, a captivated audience was transported back in time to the garden of Gethsemane to watch the arrest of Jesus Christ and his subsequent trial. On Good Friday crowds gathered to see Jesus being crowned with thorns and make his final pilgrimage to the top of Nicker Hill, just outside the village for the Crucifixion.

This Good Friday the Stations of The Cross will be at 3pm at the beautiful grotto at Nicker church. All are welcome to come along and walk the way of the Cross and relive again Passion 2014. A stone cross, a symbol and monument to mark the Passion 2014, has been erected. Next year, St John the Baptist Church in Nicker will mark its 200 year anniversary and there are plans to celebrate the milestone. The parish will also put their heart and soul into that.