Limerick IFA out in force at Fair Deal protest in Dublin 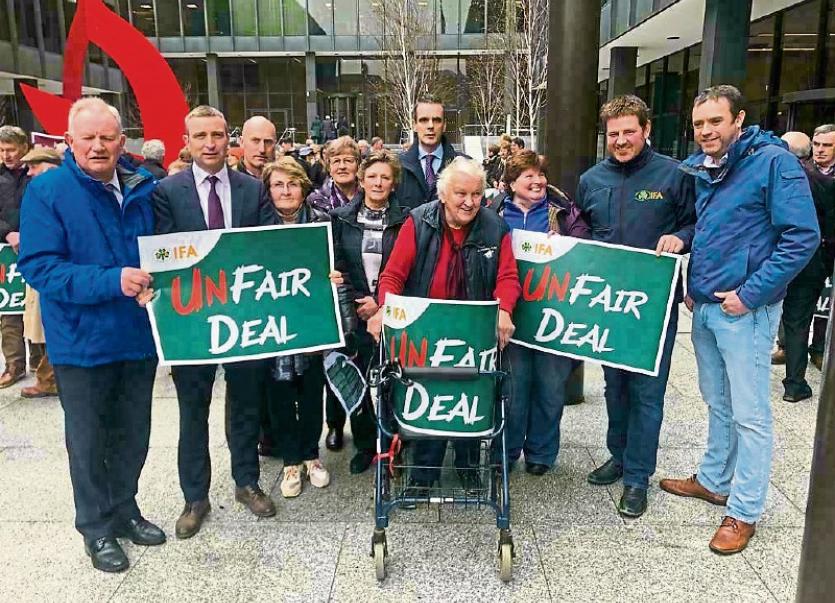 LIMERICK IFA put up a strong front at the protest in Dublin this Tuesday over the Fair Deal scheme.

They heard the IFA president Joe Healy say that the government has “abandoned farm families by failing to implement the three-year cap on farm assets under the financial assessment of the Fair Deal scheme.

“The government has been promising this would be introduced since last July.  It is now nearly nine months since cabinet approved the proposal to introduce a three-year cap on farm and small businesses assets, where a family successor commits to continue to farm the asset for a period of six years,” said Mr Healy.

The IFA president said farm families are beyond frustrated with the delays.

“When Minister Daly announced last July that he had cabinet approval to introduce a cap and that he would be progressing the matter in the Oireachtas in the autumn session, we thought we had reached the finish line.  Unfortunately, that was not the case and we find ourselves here today,” he continued.

IFA farm family and social affairs chair Caroline Farrell said the ongoing delays are causing huge uncertainty and distress for farm families and are jeopardising the viability of the farms affected for future generations.

“In the time since cabinet approved the proposal, it has cost individual farm families an estimated €40,000 in nursing home costs. What is most upsetting is that the delays are having the greatest impact on the most vulnerable of farm families, whose farms will be unviable unless the minister acts now,” said Ms Farrell.

IFA is calling for the changes to be introduced without any further delay and retrospectively applied to July when the cabinet approved proposal for new and existing farmers availing of the Fair Deal scheme.

And that the three-year cap must also be applied to farms that are currently leased, but where a family successor gives a verified commitment that they would continue to farm the asset for a period of six years.