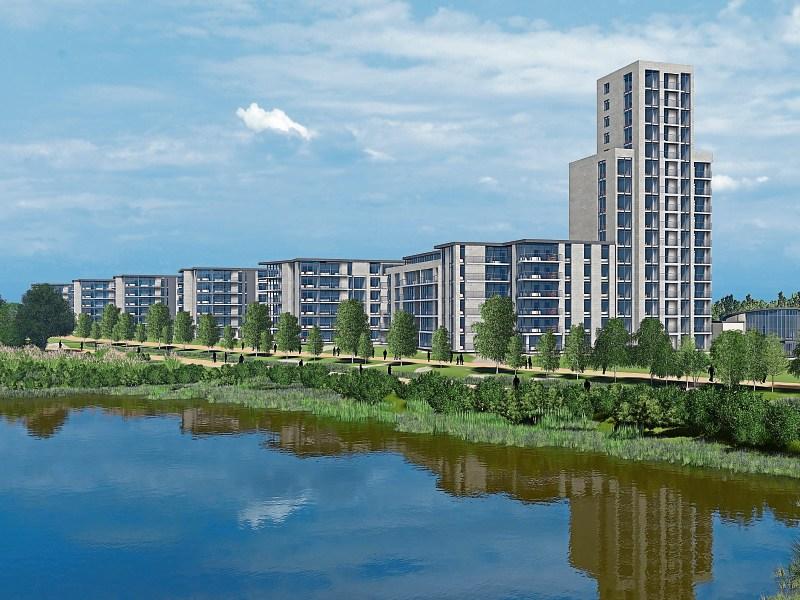 Architects impressions of mammoth development, which will include a 16-storey residential tower

AMBITIOUS plans have been submitted for one of the largest ever residential developments in Limerick, including a 16-storey tower, the Leader can exclusively reveal.

An Bord Pleanala has received an application for a massive development of 303 apartments, comprising 30 houses and 64 student bedspaces at Pa Healy Road and Park Road, along the Canal Bank.

The seven-block complex, developed by Revington Land, is proposed to be built on 10 acres on a “prime site” between UL and the city centre. According to documents seen by the Leader, Block 1 will consist of a “feature tower residential building”; Block 2 will be student accommodation; and Block 3 to 7 will be apartments.

There will be two- to three-storey dwellings to the central area, and a “pavillion block” where there will be a creche and cafe.

And according to a source, this is one of a number of “similar-type” developments that are being discussed.

Project manager Gary Lawlor, of Lawlor Burns & Associates, said the site “ticks the boxes for everything”.

“It’s bringing city living, but you have the amenity of the park and the canal and the walkways and the cycle pathways. You couldn’t have picked a better location for residential at that scale,” he added.

He added that they are due to submit final information on the infrastructure to An Bord Pleanala, which will be completed in the coming weeks.

Mayor James Collins described it as a “hugely significant” development, and that it is “yet another step in Limerick’s development into a world class university city. We all know that there is growing pressure on rents in Limerick and while these new apartments will predominantly cater for students, this will have a knock-on effect of freeing up rental properties elsewhere in the city,” he said.

Joe Wheeler, of Wheeler Auctioneers, Hospital, was the selling agent the 10 acres for a “considerable” sum. Welcoming the proposed development, he said: “It’s the last city centre site, or site with access to the city centre, and it’s going to complement the Opera Centre [Project Opera]. It’s a prime site. And in fairness to them, they have come up with a fine concept for it. It’s very impressive.”