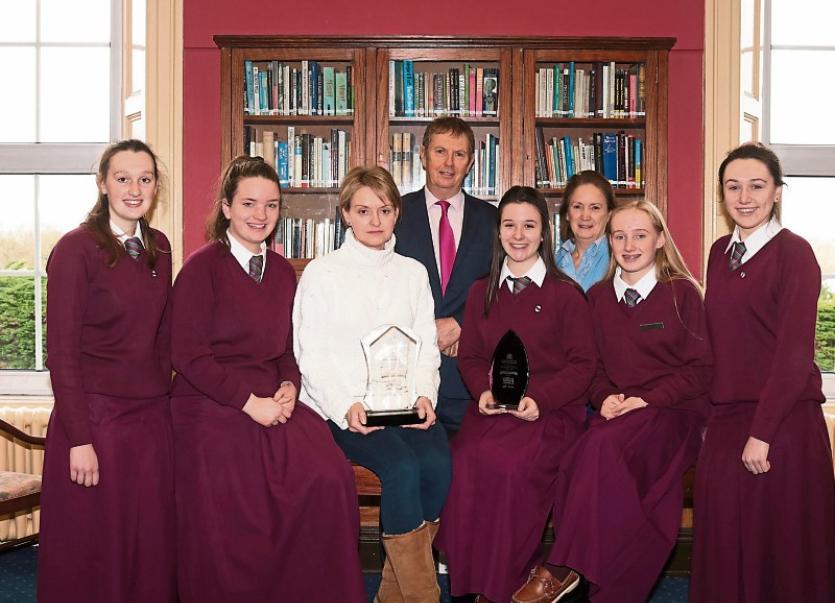 THE PRINCIPAL of Laurel Hill Secondary School has congratulated five of his students who were named the overall winners of the 2019 Certified Irish Angus Beef Schools' competition.

“They created lesson plans that could be used by primary school teachers to explain agriculture, beef production and the unique characteristics of Irish Angus beef.  The winning students helped to rear their Angus calves at Salesian Agricultural College over an 18-month period. This is an excellent achievement for all the girls involved as none of them are from a farming background,” said Mr Cregan.

Announcing the winners, Charles Smith, general manager of the Irish Angus Producer Group, said: “The students from Laurel Hill were deserving winners of this competition; not only for their work ethic, commitment and interest in the project they were given – but also because, for them, everything was a bigger challenge and they met that challenge head on. None of them have a farming background or any agricultural knowledge; yet they fully embraced this project and excelled in its delivery.”

The girls helped to rear their calves until they accompanied them to the meat factory where they were processed as beef. They said winning the Certified Irish Angus Beef Schools competition was an “amazing experience”.

“It was definitely something we didn't expect. It was a surreal feeling getting up on that stage. Back in fourth year, we would never have thought that we would be here today as the overall winners of the competition. None of this would have been possible without the support of our teacher, Deirdre Condon Gaffney and of course Salesian Agricultural college who helped us rear our cattle.

“We would especially like to thank the Certified Irish Angus producer group and the sponsors of the competition ABP and Kepak without whom the competition would not be running,” they said.

The five sixth years put a lot of hard work into the project over the past two years and are “so glad it all paid off in the end”.

“We started out in this competition completely clueless and ignorant to the world of agriculture but now we are fully immersed in agriculture and it’s safe to say this competition has been life changing. We will be putting the prize money towards our third level education and will also be getting some presents for people who have helped us along the way and of course we will have to spend a little bit of money on ourselves too!” they smiled.

Each of the finalists receive the financial benefit involved in the selling of the animals to the processors on completion of the project which amounted to an average €6,500. The Laurel Hill students also received an additional grant of €2,000 for their further education.

The hardest day for them was taking the cattle to the factory last November..

“Even though we knew the day would come it was difficult to part with our five Irish Angus animals but we do realise that this is the reality of farming. We were so pleased with the exceptionally high standard of animal welfare at ABP Rathkeale, where we were assured that our animals would not be unhappy or stressed in the slightest. It was also very educational and informative to see the Wellies to Bellies process in action from the very first day we saw the cattle at the ploughing to November 9,” they said.

Meanwhile, there could be more Limerick success in the future as three local schools were among 31 groups to exhibit their project ideas for the new competition.

John the Baptist Community School in Hospital, Villiers and Laurel Hill are all hoping to make it into the final five.