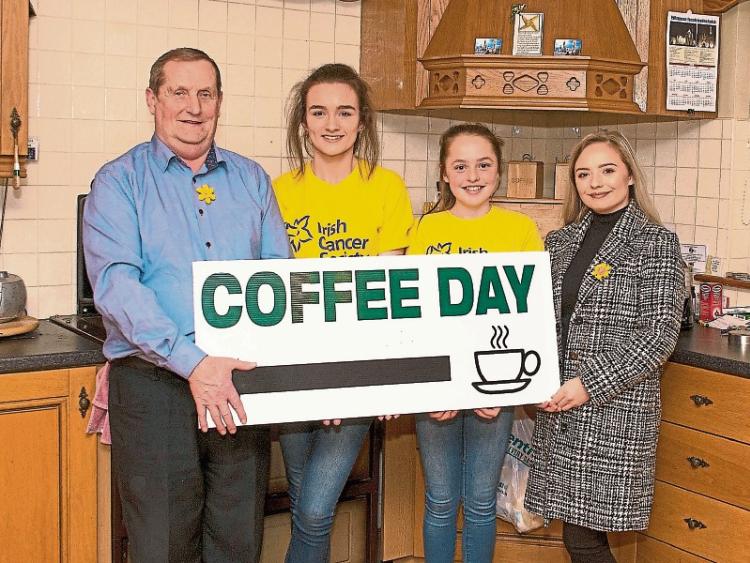 THE LONGEST coffee and tea ‘morning’ in Ireland could soon be the longest in the world.

Mike will thrown open his doors at 7.30am. It will be well after midnight when he, the girls and his kettle can take a break. To date they have handed over €16,000 to the Irish Cancer Society.

Mike holds the event for the Irish Cancer Society as he is a survivor. Loved ones of Saoirse, Tara and Sarah have all been touched by the terrible disease – as has practically everyone.

The mammoth coffee morning began so early because people asked him could they call in before work. And the day just got longer and longer.

The society told them it was the longest coffee morning in the country. So this year they got in touch with the Guinness Book of World Records to see if they could go global

“We’re not trying to break a record. We’re trying to create a record because there is none. We have to take a note of everything and we send off all the information then. If there is nobody here between 9am and 9.10am, for example, we write that down and that is taken off the very end for the grand total of hours. We send all the information off and then see will they accept it,” said Mike.

Last year was their biggest event to date. A total of 327 men, women and children had a cuppa and a slice of cake or tart and helped raise €6,000 for the charity.  What you can’t calculate is the sense of community.

“We always have great craic. You have to have the chat. We had a meeting the other night and we said we wouldn’t set any goals. We’ll see what happens,” said Mike.

To find his house, turn left in the village of Pallasgreen if you are travelling from Limerick and it will be sign posted from there.

A warm welcome is guaranteed from Mike, Saoirse, Tara and Sarah.

“The three girls are dynamite. They are all taking the day off school or work for it. Where would you get three youngsters working for 16 hours in a row for nothing. We are a team. Without them it would never have happened or continued - I mean that from the bottom of my heart,” said Mike, a former postman and farmer who played all levels for Pallasgreen GAA.

Michael D Higgins has also recognised their efforts. Mike needed something stronger than a cup of tea when the letter carrying the presidential seal fell on his mat one morning

It read: “May I commend Saoirse Corbett, Tara Campbell and Sarah Dillon for their fundraising efforts for the Irish Cancer Society. Through their dedication and work, sustained over a number of years, they have demonstrated remarkable solidarity with and commitment to others, and have done so with energy and enthusiasm. They are a wonderful example to their community and so may I wish them the very best in their continuing efforts.”

Mike kept it a secret. He invited the girls and their families to a night in his house last September and gave each of them a framed copy of the letter.

All are welcome to his Pallasgreen home on Friday, March 22.