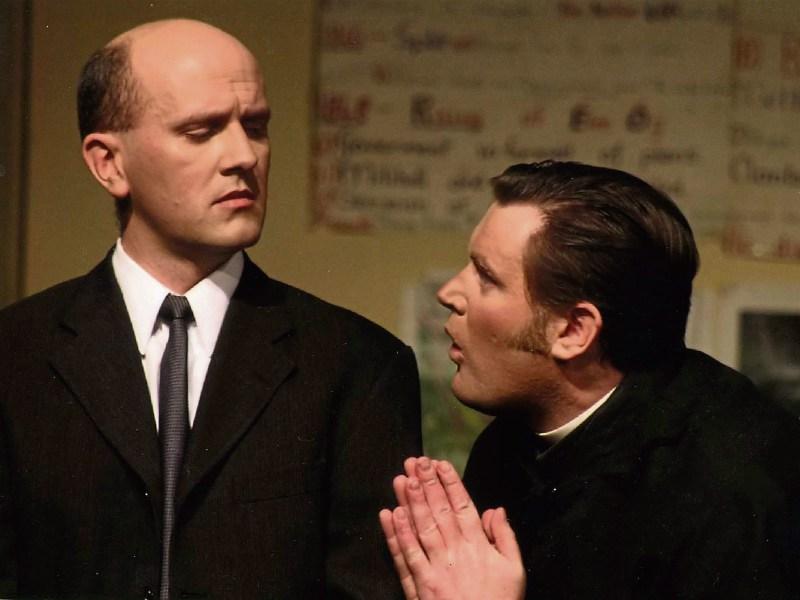 Eibhear O’Dea and Kieran Kelliher in The Master in 2011

AMATEUR drama is as much a part of Kilteely-Dromkeen as the stars in the sky and the grass on the ground.

Plays were staged in the parish as far back as 1880. Continuing that tradition today are the St Patrick’s Players in Cloverfield. Treading the boards was so important in the locality that in 1979 they built their own permanent home for drama in Cloverfield. The Teach Drámaíochata, or The Teach, was born.

This week the players will mark the building’s 40th birthday with their performance of Juno and the Paycock. It runs in The Teach on Thursday and Friday, March 14 and 15. Then it moves to Pallasgreen Community Centre on March 17. The curtain drops at 8.30pm on each night.

One of the beating hearts of the drama group for decades has been Pat O’Dea. Known as “the master”, Pat has written, directed and starred in countless productions. He says Cloverfield and drama have been “synonymous for over one hundred years”.

“In 1912, the first drama group on record was known as the Kilteely Dramatic Society. They went out of existence in 1915 due to World War I. It must be remembered that paraffin lamps were the only means of lighting at the time. In fact paraffin oil was the only lighting system in rural Ireland up to the mid-forties when rural electrification was installed.

“From the 1920 period onwards social life in Ireland, as we understand it, did not exist due to the troubled times. When this group went out of existence, the oil lamps didn’t flicker again until the mid-twenties,” said Pat.

It was the Boherroe Players who relit the burning passion for drama. They were followed by the Shamrock Players in 1942. The Sarsfield Players also joined the party in 1942. The Banba Players were formed in 1949.

“No parish in Ireland could perhaps claim to have four drama groups operating simultaneously,” said Pat.

In 1954, the St Patrick’s Players were set up and it has stood the test of time. Pat says the foundation stone was laid many years ago by dedicated women and men who consistently delivered good performances, often under very difficult circumstances.

A review from the Limerick Leader in 1912 said a performance of Wolfe Tone by the Kilteely Dramatic Class was “as nearly as perfect as possible”.

While their production of the well known farce - The Irish Doctor - “made some people laugh who had never laughed before”.

“We will always hold dearly the memory of these people,” said Pat.

He says they perform for the enjoyment and craic during rehearsals..

“Our approach may be considered somewhat informal but we consistently present productions of a high standard,” said Pat.

Winning back to back All-Irelands in Scór is proof of that.

It was in the early seventies that the Players decided they needed a permanent home. That desire was so great that The Teach was officially opened in 1979 by historian, Mannix Joyce. The first play performed there - The Silent Valley - was written by Pat and an annual show has continued there to this day.

Forty years of fostering and imbuing the love of drama will be celebrated next week with Juno and the Paycock.

“The Teach is traditional in design and character and is very important in the cultural and social life of the area. It is also an ideal setting for traditional music, song and dance,” said Pat. It is part of and for the community as last month's party for retiring postmistress, Mary McKenna and sacristan, Mikie O’Riordan demonstrates.

The Teach has inspired poems and lyrics. Sean Ó Morónaigh wrote a song entitled An Teach Drámaíochta from which the following verse is taken:

And strong men sprightly, dance round the floor,

Their tunes obeying, the call for more,

For those discerning, a place of learning,

Of things concerning, our native lore,