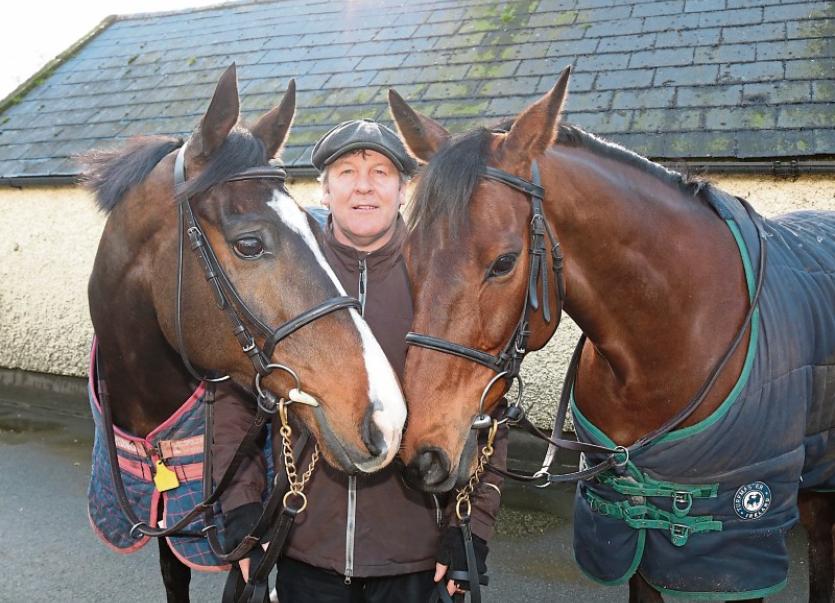 Enda Bolger in yard in County Limerick with two of his three horses making the journey to Cheltenham Picture: Michael Cowhey

“WHATEVER kind of a grá people have for it, it gets them rightly revved up at this time of year.”

The words of trainer Enda Bolger, discussing, what else, but Cheltenham.

With the showpiece event of the National Hunt season just around the corner, there’s a mix of  giddy excitement and anxious anticipation in the air.

At Howardstown House in Bruree three horses are being readied to make the trip to the Cotswolds.

“The two boys run in the cross country on the Wednesday, Josies Orders and Auvergnat,  and then on the Friday in the Foxhunters we have Stand Up And Fight,” says Enda of his Cheltenham team, all of which will race in the famous green and gold silks of JP McManus.

The name Enda Bolger is of course synonymous with the Glenfarclas Cross Country Chase at Cheltenham, having won the race five times.

“Obviously the Cross Country was our lucky race for a good while but it’s really after turning out to be a very hot contest now.

“Tiger Roll won his last race very impressively. We are hoping for a good run but I’d be surprised if we beat him,” is Enda’s honest assessment.

As for Stand Up And Fight, he is hoping for a strong performance which will stand to the seven-year-old.

“We think Stand Up is going to be a really nice hunter chaser down the line but he has never even been to the UK or experienced the razzmatazz of Cheltenham. It’s going to be a big experience for him.

“It’s like a fella playing for the first time in Croke Park. He is going  to have his eyes opened.

“Again, I’m hoping for a good run from him but I feel he’ll be a far better horse for all the experience of it.”

The horses head across the Irish Sea on Monday ahead of the famous Cheltenham roar which goes up at 1.30 on Tuesday to signal the start of the four-day festival.

While Enda has a long and fruitful association with Punchestown and the spring meeting  remains his favourite festival, Cheltenham, he says, “has the greatest racing, and the greatest build-up and it’s where every trainer, owner and jockey wants to be, as well as the punters”.

“I think it’s Ireland against England, that’s where it comes from and we have great horses in Ireland at the moment and we are well able to take them on because we have the best owners and everything.

“That’s really what it is - that rivalry between Ireland and England. So long as we come out the right side of it, that’s the main thing.”

We can’t let the handler go without getting a few tips for Limerick punters next week.

“I hope JP wins with Buveur D'Air,” he says of the JP McManus-owned horse which will bid to become the sixth horse in history to win the two-mile hurdling crown three times.

“And I think a few bob each way on my lads -  they are all there doing their best. I think Josies Orders would be my best of the three.”