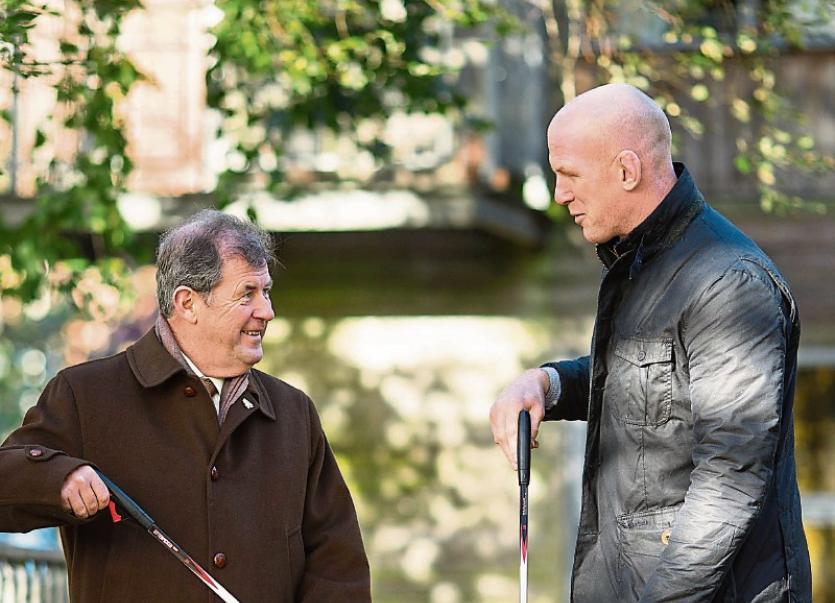 Paul O’Connell with JP McManus at a previous TLC launch

MUNSTER and Ireland rugby legend Paul O'Connell has said he is “confident” Ireland will beat France in this Sunday’s Six Nations clash, while also admitting he is “disappointed” with the omission of fellow Limerick man Sean Cronin from the squad.

Speaking this Thursday Paul O’Connell said that while he thinks France are definitely improving, “they have too far to go to get to where Ireland are.”

“I’d be confident enough they’d beat France especially at home and especially now that Wales have beaten England and they have a chance of winning the championship on that last day. I’d be confident,” added Paul, who was speaking at the Hunt Museum in Limerick where participants of the Design a TLC Bottle Competition had their work displayed this week.

Limerick man Paul, who is an ambassador for the JP McManus-backed Team Limerick Clean-Up, said he wouldn’t be worried about Ireland’s recent loss of form which saw two less than emphatic wins over Italy and Scotland and a defeat at home to England.

He says there is “no coach in the world better than Joe Schmidt to learn from losses or to learn from not playing well so I think it will stand them in good stead for the World Cup.”

When questioned on the omission of Sean Cronin from Sunday’s match day squad O’Connell said he was “disappointed” for his fellow Limerick man.

“There is no doubt Sean Cronin is part of their World Cup plans and I would say that they need to develop other options and that’s probably why Rob Herring is into the squad, I’m not too sure. I think there is no better player in Ireland who can bring impact in off the bench than Sean Cronin and for the World Cup you need that so I’m sure he’ll be back in the squad before long.”

Paul was at the Hunt Museum as part of the build-up to the fifth instalment of the popular community initiative Team Limerick Clean-up, which is set to take place this Good Friday, April 19.

“There’s a brilliant effort from the kids,” said the father-of-three in reference to the Design a TLC Bottle Competition.

“It’s funny we’re trying to promote the awareness of recycling among kids but they probably know more about it than the adults do. I know my kids are better at it than we are - they tell us what plastic to put in the bin and what plastic you can’t put in the bin and all that. It’s a great competition. It’s gets the school focused and aware coming up to TLC. I think we have over 70 schools taking part this year. Promoting it in the schools is really important. I’m hoping to be back for it.”

JP McManus, who joined Paul at the prize giving ceremony said the amount of effort put in by the children and the tutors “is something else”.

“You’d want to be here to believe it. And they have ideas for next year already. I was talking to a few of them. I don’t know how they can better this year,” he smiled.