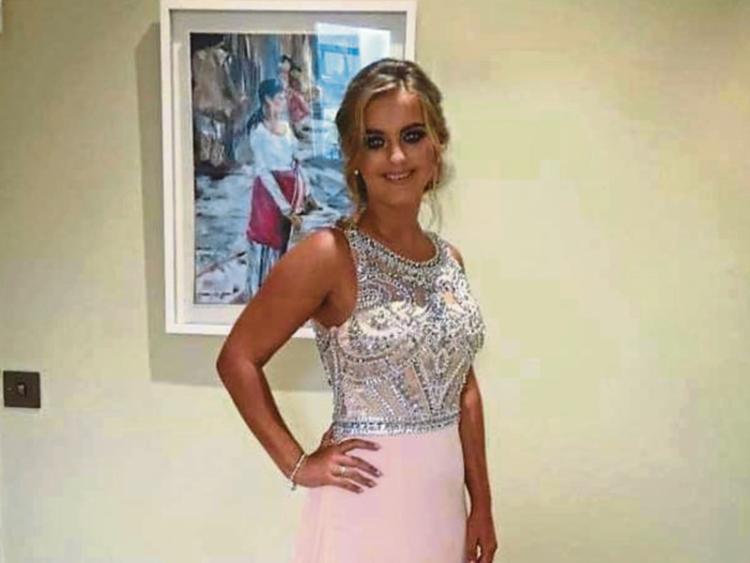 A UNIVERSITY of Limerick student tragically died in a “freak accident” in which she fell down stairs while socialising with friends at a house party, an inquest into her death has heard.

Sophie Coll, 19, from Barna, County Galway, suffered a skull fracture when her head struck the ground after a male “appeared to lose his balance” and “pushed back [on three women] like dominos” on September 25, 2017.

Sophie, who had transferred from NUIG to study business at UL, was attending the social gathering at Stanford Close, College Court when the tragedy occurred, the coroner’s court in Limerick heard this Tuesday morning.

Sophie’s friend Zoe Patterson, of Kilcoolishal, Glanmire, County Cork, said that they had one can beer of each and had another can of beer when they were at the party.

In her deposition to gardai, Zoe joined three others—Sophie, Keely McGrath and Darragh Hannify—when walking up the stairs in the house.

“Darragh appeared to lose his balance at the top and fell down,” Zoe said, adding that “like dominos” Sophie fell, “flew past me backwards” and hit the floor.

The inquest heard that Sophie was on the 6th or 7th step when she fell.

Ms Patterson said Sophie “had a large cut to the back of her head” and that she was bleeding from the ears.

When assisting their friend, Ms Patterson and Ms McGrath noticed she was “unconscious but breathing even though it sounded like she was snoring and congested”.

The National Ambulance Service arrived at the scene after about 40 minutes, the inquest was told.

Ms McGrath, Aherlow, Tipperary, said that they had “a can” when they were in sitting room prior to going up the stairs at the house party.

She said when they went up the stairs, Mr Hannify, who was in front of the three young women, “kind of wobbled and pushed back on us like dominos”.

When she was assisting Sophie, she “screamed for someone to ring the ambulance”.

She said they were “giving out that [the ambulance] was so far away” as they had been told it was coming from Nenagh.

She was told “to get a dry, clean cloth to put pressure on the wound”.

Ms McGrath said Sophie’s parents were in France at the time of the incident and Sophie’s aunts went to University Hospital Limerick.

Mr Hannify said that he was half-way up the stairs when the incident happened. He said when he looked back, he saw Sophie on the ground.

He said a “crowd had gathered” and that he “didn’t want to get in the way” and waited in the sitting room.

Coroner John McNamara said to Ms McGrath: “It sounds like none of ye had a lot to drink.”

“Yeah, we hadn’t much to drink, and it was over a long space of time,” she replied.

Advanced paramedic Dan New, attached to the Dooradoyle base, said he was called to the incident of an “unresponsive female who had fallen down stairs” at around 9pm.

He said Sophie had symptoms that indicated signs of “serious head injury”. After placing a survivor collar to her neck and applying a vacuum mattress for support, Sophie was treated at the scene for 20 minutes.

Pathologist Dr Gabor Laskai said a postmortem was carried out on September 28, 2017. He said there was confirmation of removal of donated organs, and confirmed head injury which included “extensive brain damage”.

Mr McNamara asked Dr Laskai if time would have made a difference, to which he replied: “I don’t think so.”

Based on the evidence presented at the inquest, heard at the HSE buildings on Catherine Street, Mr McNamara returned a verdict of accidental death.

“I know for the family listening to that evidence and going through those details again must be extremely harrowing,” the coroner told the family.

He said that alcohol was not a factor in her death, describing the event as a “freak accident”, and that it was “very tragic circumstances for her family and friends”.

He said that Sophie was a “young lady who had her whole life ahead of her”.

Expressing his condolences to the family, Insp Dermot O’Connor commended Ms Patterson and Ms McGrath’s actions on the night.