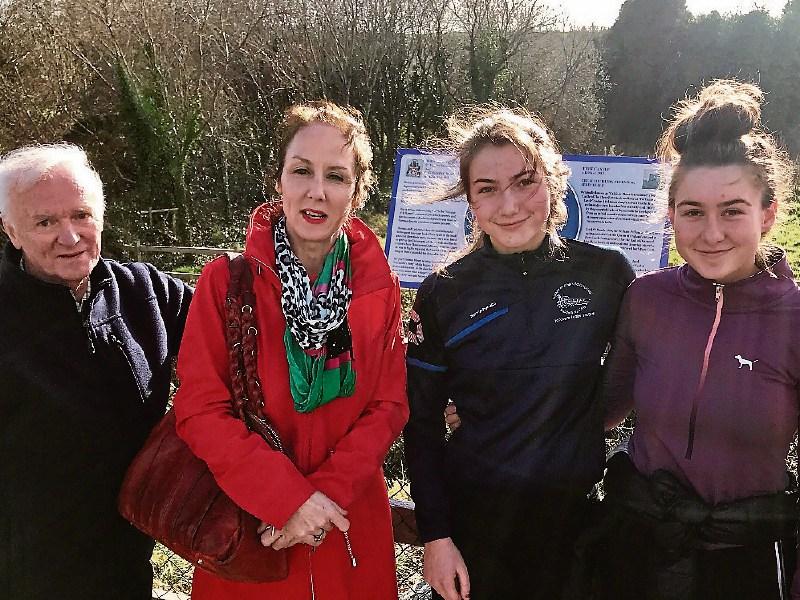 AS part of the ongoing campaign to reclaim and renew the heritage of Abbeyfeale, a special plaque has been unveiled at Purt Castle, just outside the town.

And the castle has now become another link in the town’s Heritage Trail, a trail which includes the Cistercian Abbey, the original nucleus for the town, Daniel O’Connell, the Liberation and the Italian nationalist Princessa Cristina di Belfiojoso.

Unveiling the plaque, Maurice O’Connell, chairman of Abbeyfeale Community Council said it was fitting that the castle was once again taking its place as a major focal point for all to enjoy.

“There is a new-found interest in Purt Castle by locals and tourists alike, now that it is very much interlinked with the Great Southern Greenway,” Mr O’Connell said.

And he gave a brief, potted history of the castle.

“It’s been in existence for over 600 years and has been central to some of the most significant events affecting history in Abbeyfeale, Limerick, Kerry, Munster and Ireland as a whole,” Mr O’Connell said.

The castle, he added, was built in the early to mid 1400s by the ruling Fitzgerald family and “had seen its fair share of loyalty, love, slaughter, war and famine.”

“One such love story is that of Thomas FitzGerald, 5th Earl of Desmond who was forcibly dispossessed of all his lands and his title in 1418, by his uncle James FitzGerald. Thomas had fallen in love with and married Catherine MacCormac of Abbeyfeale, a daughter of one of Thomas's dependants, William “The Monk of Feale” MacCormac,” Mr O’Connell continued.

But the marriage, he pointed out, breached the “Statutes of Kilkenny”, a series of laws which severely and forcibly restricted relationships between those of Norman descent and those of Gaelic descent.

“Thomas and Catherine’s love for each other and subsequent marriage broke every law in the book and cost them their entire fortune. They were forced to flee to France where Thomas died two years later. He was so highly regarded that both the King of England and King of France attended his funeral in Paris,” Mr O’Connell recalled.

By the Feal’s wave benighted,

No star in the skies,

To thy door by Love lighted,

I first saw those eyes.

Some voice whisper’d o’er me,

As the threshold I cross’d,

There was ruin before me,

If I loved, I was lost

Another telling episode in the story of Purt Castle were the happenings of March 16, 1580, when Sir William Pelham and his army, acting on behalf of the Queen of England camped at Purt Castle in their search for the Earl of Desmond. Unable to find him and locals not knowing where he was, Pelham and his Army destroyed both Purt Castle and the Old Abbey in Abbeyfeale.

“Three years later and with 30,000 people dead throughout the province of Munster, the last Earl of Desmond, Gerald FitzGerald, wrote to the Queen looking for a truce in the ongoing wars. It was signed; Abbeyfeale, 15th April 1583, Garrot Desmond,” Mr O’Connell recounted.

“But the Queen did not acknowledge this and Gerald was killed a few months later on November 11, 1583 between Ballymacelligott and Tralee in Co Kerry.”

Mr O’Connell thanked all those who had supported the Purt Castle project: the Collins family on whose land it stands; Abbeyfeale Men’s Shed to helped clear the site, West Limerick Heritage and West Limerick Tourism and Limerick City and County Council.