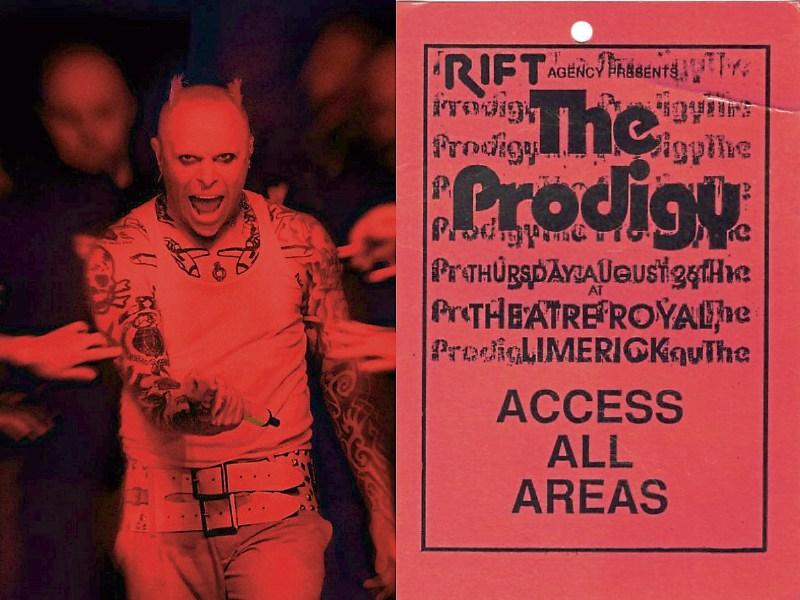 Keith Flint of The Prodigy, left and right, an access all areas pass from the Theatre Royal gig in 1993

IN the wake of the sad news of the death of legendary The Prodigy front man Keith Flint, a gig the band played in Limerick over 25 years ago has been fondly recalled.

Seamus Flynn was the owner of the Theatre Royal on Cecil Street, where the band played on August 26, 1993. He described seeing the young group, who were in the early stages of their career, on stage.

“It was very early in their career. But it was a great gig. They were very well supported and drew a fantastic crowd of 700 or 800 people,” said Seamus.

“They were very nice guys. They were trying to make it at the time and had a great energy, they were playing everywhere. The atmosphere they had when they played was brilliant. You could really tell something special was happening,” he added.

To Seamus it was clear even then that Flint, who passed away at the age of 49, was an influential artist.

“It was clear he was the main man. He was a real creative force behind the music,” said Seamus.

“They were like The Cranberries in terms of talent. You could just tell, even early on their career, that there was something special about them,” he added.

The venue, which was later the filming location for the Eurovision episode of Father Ted, had hosted a number of well known live acts, but none who packed a punch like The Prodigy.

“There is one thing I remember very vividly. They definitely blew the cobwebs off of our soundsystem,” Seamus laughed.

“We had played all kinds of music, from classical to classic rock. But we had never played anything like that before,” he added.

“I was much younger than I am now and I’m not ashamed to say I was starry eyed. Their rise was such a meteoric one. It was huge and it seemed to happen just after their Limerick gig,” Joe said.

“They already had a huge Limerick presence, particularly in the underground scene. They had such a killer live presence and Keith was centre to that. That’s what really set them apart,” he added.

Limerick’s love affair with the band never died out, with Leeroy Thornhill returning to the city on a number of occasions to play venues such as the Trinity Rooms.

“They were certainly a band that lasted generations. They’ve always been a fixture in the Limerick music scene peripheral vision,” said Joe.

“There will be a huge amount of grief coming from across Limerick and Ireland for Keith,” he added.

The band released a statement following the news of Keith Flint's death this Monday.

“It is with deepest shock and sadness that we can confirm the death of our brother and best friend Keith Flint. A true pioneer, innovator and legend. He will be forever missed.

We thank you for respecting the privacy of all concerned at this time.”