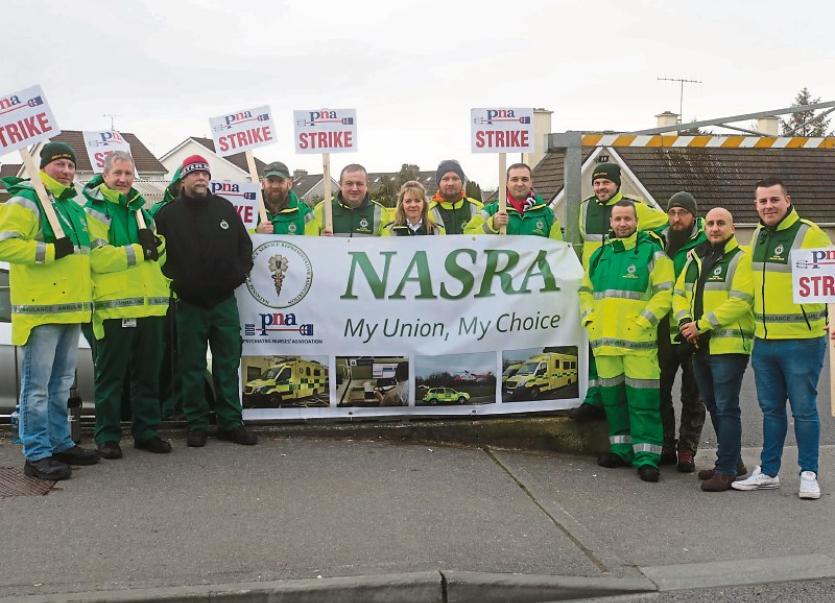 Members of Nasra on the picket line on February 15 PICTURE: MICHAEL COWHEY

MORE THAN 30 members of the National Ambulance Service in Limerick are being “forced to strike” for two days this week, as the battle for union recognition continues.

The National Ambulance Service Representatives Association (Nasra), which is affiliated to the Psychiatric Nurses Association (PNA), has previously taken to the picket lines on two occasions over the issue, on January 22 and February 15.

Nasra had warned the Government and management that if there had been no movement in talks over the union, which has 600 members nationally, strike action would take place for a third time, but this time for two consecutive days.

The strike will take place this Thursday and Friday.

Mid-West PNA Nasra secretary Liam Moore said: “We are forced to strike once again but this time we will be striking for two consecutive days on Thursday and Friday this week. As before, we are striking for our right to have our own union, PNA Nasra, to represent us collectively.

“As of yet, we have been ignored by the HSE and are more resolute than ever to have our union recognised. Nobody in the ambulance service wants to be out on strike, we want to be able to come work and get on with work.”