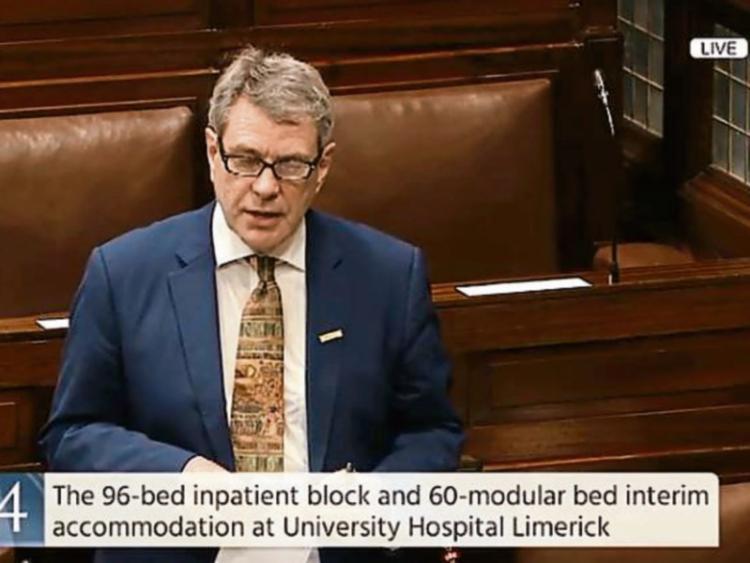 A LACK of clarity over the crucial 60-bed block at University Hospital Limerick has “caused great frustration in the Mid-West”, a TD has said in Dail Eireann.

Dr Michael Harty TD, who represents Clare, called on Minister for Health Simon Harris to confirm if the €19.5m modular block will be funded in the next capital plan, and when that funding will be announced.

Addressing the parliament, Deputy Harty said “doubt has been cast over whether the promised money will be produced and whether it will continue to be part of the capital plan”.

On November 5, Minister Harris confirmed that funding would be available. He reiterated that commitment at a health committee last Wednesday afternoon.

“If we are to have that by the end of 2019, construction must start immediately. When will the first patient be admitted to that block?” Deputy Harty asked Minister of State, Finian McGrath, speaking on behalf of Minister Harris.

However, the Dail did not receive a firm line on when the delivery of the bed block will be.

“Then there is the issue of the 96 bed permanent unit. When will the funding be made available through the capital plan for that permanent 96 bed unit? How much will this cost? There is great controversy over how building projects such as this are tendered, procured, designed and built. Can the Minister of State confirm a costing has been placed on this 96 bed unit? What is the current situation in relation to design and planning and when does the Government expect the work to begin?”

Minister McGrath said there will be funding in 2019 “to allow this important project to progress”.