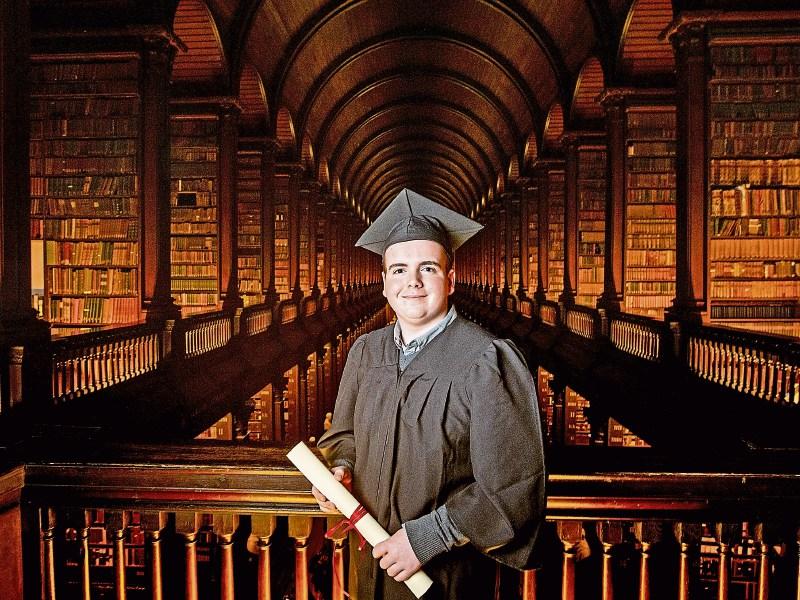 YOUNG Abbeyfeale student Adam O’Sullivan has taken one of the top prizes in this year’s Book of Kells Creative Competition, beating off stiff competition from both national and international entrants.

Adam’s skilful drawing won him first place in the secondary school art category and he was presented with his cash prize and certificate at a ceremony in Trinity College last week. His winning entrant, on A3 size paper, was also framed as part of his prize.

“I was shocked when I heard I had won,” the 16-year-old Transition Year student said. “I wasn’t expecting it at all.”

“We had looked at the quality of entries from last year and I said if I get up to Dublin alone it would be an achievement,” he explained. “The fact that I won first prize was out of the world.”

Adam is the only one of art teacher Keith O’Rahilly’s students to enter the competition.

“It was our first year entering. We did it as a trial run,” Keith explained. But he continued: “We are delighted at Adam’s success. This young man has been keen on art since he started here. He lives in the art room. He eats it up and it great to get recognition for his talent.”

The idea behind the competition, devised and hosted by Trinity College, is to inspire writers and artists in their response to the Book of Kells. The competition was inaugurated last year and in this, its second year, attracted some 1,600 entries in total from all over Ireland, the UK, the US, Europe and even Australia.

For Adam, the son of Denis and Joanne O’Sullivan, it was an easy choice to enter the competition.

“I have always had a thing about the Book of Kells,” he said. “It is such a beautiful piece of art but also part of our heritage as well.”

This year’s theme was Animals and the Book of Kells and Adam selected a page, redesigning it and recreating it using all the animals in the book itself.

“It took me ages,” he acknowledged. “I spent a good few weeks on it. The level of detail was made.”

“The range of animals, birds and snakes around the letters that symbolise the name of Christ really demonstrated Adam’s familiarity with the manuscript and really brought the page alive. We also really enjoyed his bold use of colour.”

RTE news presenter Sharon Ni Bheolain, who attended the prize giving ceremony, said “it was a pure delight to be an ambassador for this year's Book of Kells Creative Competition”.

“I was bowled over by the standard of entries. People from every walk of life put their heart and soul into interpreting and visualising our most celebrated of manuscripts.

“Animals, birds and gospel scenes have all been gloriously re-imagined by our finalists and the colours and artistry leap off the page. The Book of Kells is a national treasure and it is so gratifying that Irish people retain such pride in its enduring charm.”