‘Every young fellow you see has a hurley’: All-Ireland fever in County Limerick 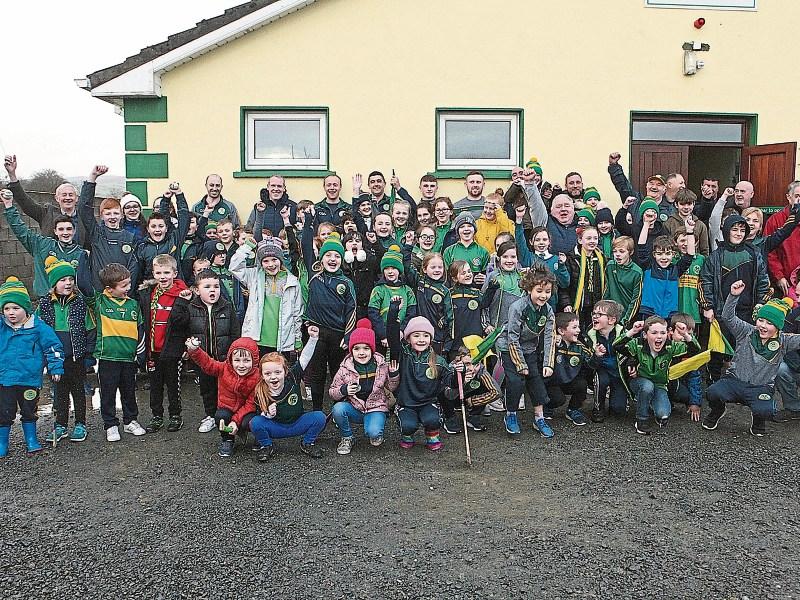 The above quote by Thomas Jefferson is written on one of Cappamore GAA Club’s dressing room walls. And that’s what the men born and raised in the shadows of the Slieve Felims will have to do if they are to become All-Ireland champions for the first time.

They face Oylegate-Glenbrien in the junior B hurling final at 2pm on Saturday in Killeedy. The Wexford team are favourites. But then again so were Galway in last year’s senior All-Ireland final.

“A rising tide lifts all boats. There is no question about it. Every young fellow you see is going around with a hurley, years ago it was a rugby ball when Munster were going well. Now it is a hurley and a ball. It is part of our culture and it is lovely to see it,” said Ger, who has been chairman of the club for 12 years.

One example is three-year-old Rian O’Dwyer who has Barry Murphy’s and Barry O’Connell’s signatures on his hurley from the homecoming in Doon. Rian and his twin sisters, Aoibheann and Doireann, aged five, are looking forward to the game and cheering on daddy – Darragh. His pub – O’Dwyer’s – in the village will be hopping on Saturday and Sunday and maybe Monday if they win!

Cappamore GAA and camogie clubs are going from strength to strength with over 26 teams between them. An incredible €31,000 was raised from a race night before Christmas towards the completion of a badly needed new pitch.

A tourist would think they are in a Kerry village due to the number of green and gold flags such is the atmosphere. It is also demonstrated by the around 80 men, women and children who kindly gave up their time on a wet Tuesday afternoon to show their support in this photo.

“There is a terrific buzz. When we went around the schools with the cups there was great excitement. The day of the Munster final there was a massive crowd there. There were droves of people from Cappamore – it was unbelievable. Locals are great to support the club,” said Ger.

Hynan’s are even putting on a bus to the match.

The chairman says they have a great mix of youth and experience on the panel from 18 to early 40s.

“They have put a fair effort into it.  We’re representing our county and we want to make history by becoming the first Limerick team to win the Munster junior B and go on to win the All-Ireland.  All-Ireland finals don’t happen that often for small parishes like us. No matter what level you are playing at they are hard to win,” said Ger.

There is a direct link to Cappamore’s GAA’s most famous sons with Donal O’Mahoney. The young man is a grand nephew of Fr Seamus and the late Fr Liam Ryan who won a Munster final with Limerick in 1955. Their father, Willie, won an All-Ireland in 1918.

Donal is doing his Leaving Cert this June, as is corner-back Kevin Doyle.

“I’m starting my pre-Leaving Cerificate tomorrow,” he said this Tuesday.

Kevin got man of the match in the All-Ireland semi-final win over  Galway's Ballinderreen.

The 18-year-old says the journey has been great for the club.

“Not too many people have got to an All-Ireland final. Hopefully on Saturday we can go on, win it and bring the cup back to Cappamore,” said Kevin, who will be cheered on by his proud mum and dad, Helen and Billy and siblings, Leanne, Karen and Darren.

A crowd of 1,000 is expected to travel from east to west Limerick.

Kevin attends the Abbey CBS and the fact his principal is John Kiely could be a good omen for Saturday. However, Oylegate-Glenbrien will be hard to beat. Cappamore’s manager, PJ Ryan Steel has seen them play twice.

“They are young, they are fast and they are lively,” said PJ.