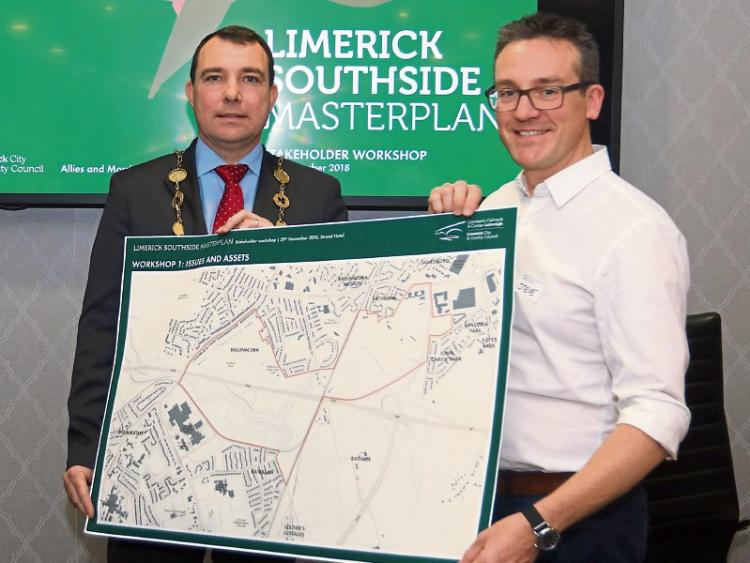 A LANDBANK on the southside of Limerick city which was once proposed for a supermarket could now be returned to community use.

That’s according to the early ideas in the southside plan, which were presented to members of the public at the Strand Hotel on Thursday.

Top architectural firm Allies and Morrison have been commissioned by the council to provide a blueprint for 75 hectares of land, primarily in public ownership on the city’s southside, including the Baggott Estate, Ballinacurra Creek, Toppins Field and the Rosbrien lands adjacent to the M20.

Following an initial public consultation in November, more than 100 people were at a second event in the Strand Hotel, where the results of the public feedback were unveiled.

Speaking at the meeting, Steve Walker, Allies and Morrison referred to Toppins Field in Roxboro, land which was once suggested as a shopping centre.

“We are starting to think about how this site can accommodate uses which might have a strategic benefit to the whole city, rather than just being yet another piece of employment land,” he told the meeting.

A new link could connect through the area, he suggested.​

Meanwhile, the plan will also include putting public footpaths through fields, to make them more walkable.

“What we’re looking at is how we can improve connections, how can we make difficult access points work better. Potentially how we can threat pedestrian routes through the land so we can start connecting neighbourgoods with the open landscape which lies beyond the park,” he explained.

Mark Taylor, Allies and Morrison said at the Baggott Estate, various elements such as allotments, adventure play areas, gathering spaces and a community orchard are under consideration.

“As we go south of the motorway, there is an opportunity to take advantage of the natural heritage, the [Ballinacurra] creek itself, and the wetlands which are around it. Making it a more resilient and robust landscape,” he said.

Part of the issue in the Ballinacurra Road is that the backs of buildings face onto much of the road, Mr Walker said.

He said the layouts could be redesignated, so homes could have two entrances to allow a more attractive facade.

”This isn’t about the council taking land and doing something with it. It’s about enabling people to do something with their own land, make their own decision with it, so we start to create a frontage which is not there at the moment,” he added. The next step will see the plans being put on public display, before the councillors then approve it. It will be then used to guide development of the area.