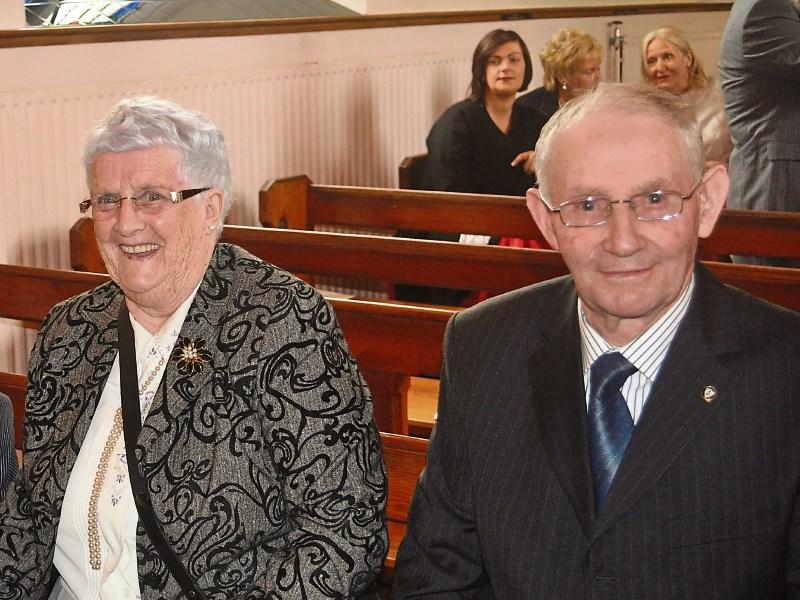 Mikie, with his late wife Nancy, from whom he took over as Dromkeen church sacristan

THE OLDEST sacristan in Ireland is blowing out the Mass candles for the last time.

Mikie Riordan, aged 91, is stepping down from his role as the caretaker of St Bridget’s Church in Dromkeen. It brings to an end almost half a century of the Riordan family looking after the local House of God.

“My wife Nancy took it over in 1974. She was the sacristan until she died in July 2016. I used to give her a hand. I took it over then when she passed,” said Mikie.

Seven days a week he opens and closes the church and makes sure it is immaculate for Mass-goers. But over 25 years past the retirement age he says the time has come to hand back the keys.

“The day has come to pass over the reins. It’s time to pack it up,” said Mikie, who was a drainage contractor in his youth. While he ensured farms in east Limerick were drier, Mikie always had the fonts in St Bridget’s full of holy water.

His son, Mike, served as an altar boy when he was a child. He says his late mum was “totally devoted” to the position.

“She did it right up to the day she died. She got the Benemerenti medal for all her years of service,” said Mike.

And while Mikie may be stepping down he says he will be on hand to give the new sacristan any advice or help he can.

His retirement comes at the same time as the closure of Dromkeen Post Office. Locals have organised a community gathering this Saturday, February 2, at 8pm in The Teach, Cloverfield, to thank their former postmistress, Mary McKenna, and Mikie.

One of the organisers, Robert Holmes said presentations will be made to both for their close on a century of service to the locality.

“We want to show our appreciation to Mary for over 40 years of friendly, dedicated service to our community, and to Mikie for his time and commitment and that of his late wife Nancy to the Dromkeen parish,” said Robert.

Fr Joe Tynan, parish priest of Kilteely-Dromkeen, said Mikie and Nancy were “stalwarts in Dromkeen”. He says it is very “unlikely” that there is an older sacristan in the country.

“He is so generous with his time and so willing. There is nothing you couldn’t ask him to do,” said Fr Tynan, who adds that it will be hard to find a replacement.

The priest reflects on when the bells had to be rung by hand.

“The Angelus bells was one of the big ties to being a sacristan because it was twice a day at noon and at 6pm every day of the year,” said Fr Tynan.

And now the bell tolls on the Riordan family’s long service to Dromkeen church.