‘We are at play, speeding is not the way’: Limerick school urge drivers to slow down 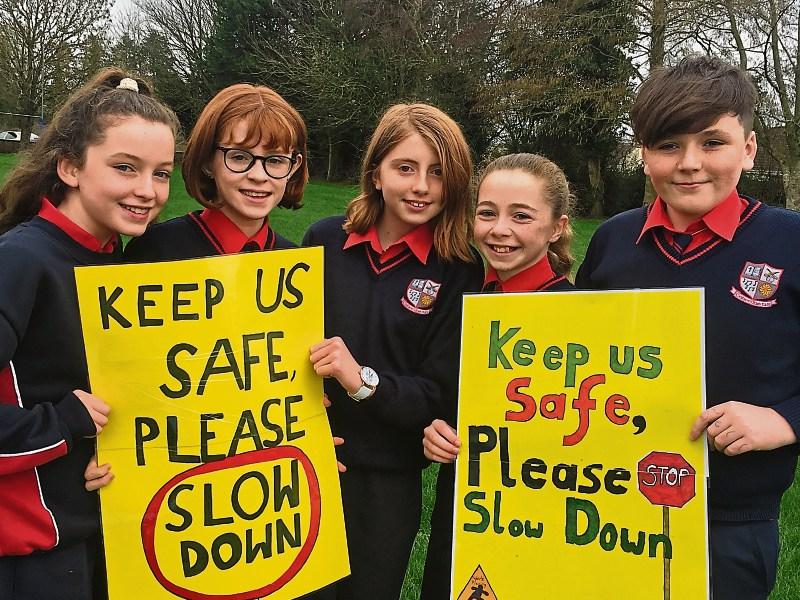 IT IS always the personal touch that means the most.

Caherline NS sixth class pupils have created and designed personalised signs to encourage drivers to ease back on the accelerator. Gearoid Power, teacher, said speeding was discussed in class one day.

“It was clear the students felt that adults often speed without realising that they put other’ lives in danger. Instead of leaving the discussion, I challenged the pupils to try and make a difference and change people’s habits,” said Mr Power. They more than rose to that challenge.  They decided to try and make motorists passing their school more aware of their speed.

“We brainstormed ideas what we could do to try and get motorists to slow down. We agreed that personalised messages from our pupils to the drivers in the form of posters or signs would encourage people to slow down and take more care when passing our school,” said Mr Power.

The four agreed messages on the signs are: Keep us safe, please slow down; Caution we are playing; We are at play, speeding is not the way; Our pupils are asking you to slow down. Mr Power and the pupils hope the signs will make a difference.

“Following positive feedback, we felt that all schools would benefit from having personalised appeals from pupils displayed near their school, asking drivers to slow down. We proposed that Limerick City and County Council hold a competition where pupils design similar signs. The winning sign could be mass produced and placed outside schools.  We met with Cllr Brigid Teefy and roads supervisor, John O' Dwyer and asked them to bring our idea to the council. We also intend on contacting the RSA,” said Mr O’Dwyer. Principal, Michael McCarthy congratulated the sixth class pupils and Mr Power for putting a lot of work into making road users more aware of the dangers of speeding.

“Their personalised signs are a fantastic idea as they speak to road users directly. I feel this could be a national idea. I am very proud of the pupils and their project,” said Mr McCarthy.