Limerick woman helping others despite cancer diagnosis to ‘give something back’ 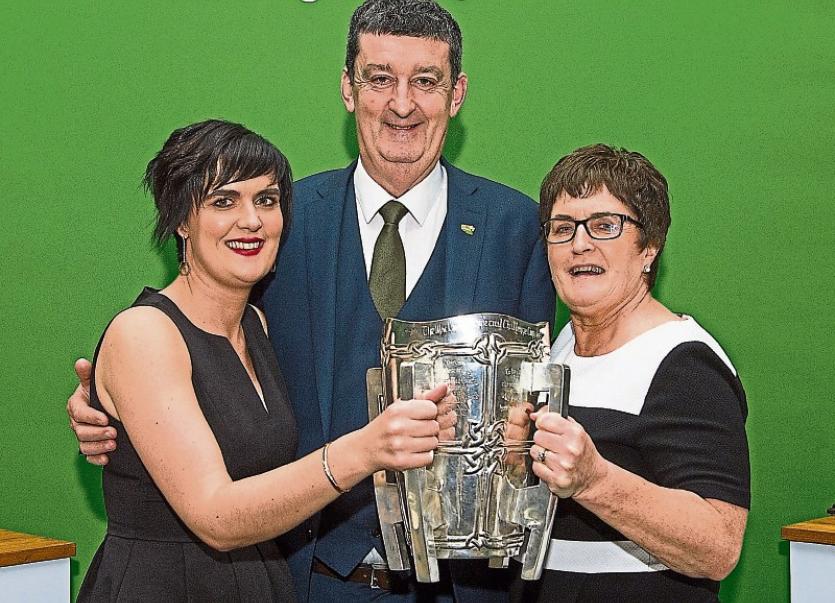 Mary Cregan with her parents John and Patsy Cregan and the Liam MacCarthy cup at the 2018 GAA Hurling All-Ireland Medal Presentation at Adare Manor Hotel in Limerick. Photo by Diarmuid Greene

ONE thousand tickets for a fund-raising dance in Limerick are being snapped up and money is flooding into an online account, thanks to the self-less and courageous decision by Mary Cregan to “give back”.

Mary was diagnosed with a brain tumour in 2015 when she was just 30 years of age and received extensive treatment. Unfortunately,  the tumour returned last year and she is, once again, receiving treatment.

But Mary is determined to do her bit, and is spearheading a fund-raising campaign for a number of cancer-related charities.

“People are going through worse than me every day,” she said. “I was lucky enough to have the support of many amazing charities,” she explained to the Limerick Leader this week.

“Unfortunately nobody knows when cancer is going to knock on their door, but it brings amazing comfort to know that there are so many fantastic charities and organisations out there that go above and beyond every day to help people like me. These same organisations and charities would not be possible without fundraising, which is why I am doing something to give back.”

Mary is hosting a dance with music by Paddy Quilligan in the Devon Inn Hotel on Friday, March 15 and the evening will also feature the Liam O’Connor Show, the accordion player who hit the spotlight with Michael Flatley’s Lord of the Dances.

But the GoFundMe site Mary set up is also attracting support, with €3,560 raised in just nine days.

“Initially, my target was to raise €600-700 for each of the four charities,” Mary explained. “But there are nearly 1,000 tickets gone out and they are going like wildfire.” She is also stunned by the generosity of those contributing online, many of them giving donations of €100. “I can’t believe how generous people are,” she said.

It all began for Mary, a qualified nurse, on a night in 2015, a night she was due to go on night shift.  She had been feeling ‘out of sorts’ for about a week but ignored it. That night however she got a fierce headache and tingling along her side. “I knew it was something serious.”

When the brain tumour was discovered, she had surgery, followed by chemotherapy and regular scans but made a good recovery.

“I was off the road for two years,” she explained but got back behind the wheel early last year. She had made a staged return to work.

“I felt fine,” she explained.

So when a scan last June showed the return of the tumour, it was a shock.

Her treatment now is based on “starving the tumour” she continued, and she is currently unable to work.

But she is buoyed up by the response to her fund-raising drive and insists that every donation is deeply appreciated.

The four charities that will receive funding are the Brain Tumour Association of Ireland, Brú Columbanus which provides accommodation for the families of patients at University Hospital Cork; ACT,the Aid Cancer Treatment organisation which works to improve quality of life for cancer patients and BHOC, the Bandon Hyperbaric Oxygen Centre. BHOC has oxygen chambers which give patients large doses of oxygen which, Mary explains, helps promote healing.

Tickets for the event on March 15 cost €10 or if you would like to donate go to https://www.gofundme.com/6pddoeo.