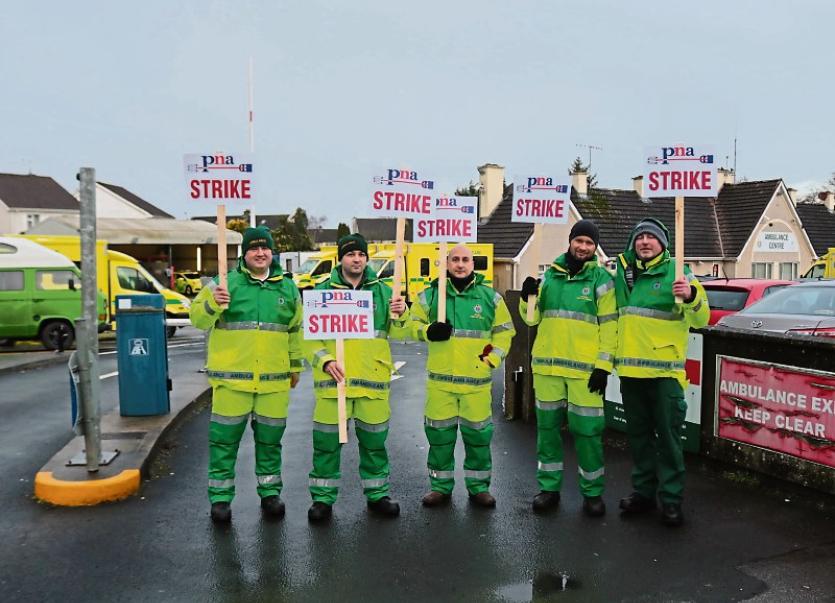 Members of the National Ambulance Service Representatives Association at the picket line outside the Ambulance base at Dooradoyle this week Picture: Michael Cowhey

A LIMERICK city councillor has accused the HSE of “union-busting tactics” following the all-day strike action held by members of the National Ambulance Service in Limerick this week.

Around 30 ambulance personnel in Limerick took to the picket lines for 10 hours on Tuesday, in response to the HSE’s not recognising their union, the National Ambulance Service Representatives Association (Nasra).

A local Nasra member has warned that if the HSE refuses to recognise the union, members will return to the picket lines on another date.

Meanwhile, Solidarity councillor Mary Cahillane has supported the ambulance personnel at this week’s strike action at their base on St Nessan’s Road.

“The HSE previously deducted members subscriptions for NASRA as is customary and then suddenly stopped, instead challenging Nasra’s right to represent those workers. Why the sudden change? Their justification is that it is to maintain good relations with existing unions, but that sounds like an excuse. In reality it looks like HSE management fear proactive and fighting representation among their workers.

“No one wants to see the disruption of ambulance services, but if there is disruption the responsibility will lie at the door of the HSE and their union busting tactics.”

Liam Moore, of Nasram said that “all contingencies” were in place for the day, and that all emergency calls were covered by paramedics.

He said: “Our message is very clear. We are not asking for money. All we want the HSE to do is to recognise our union and sit down and talk with us. That’s all we want. If they don’t come to the table after today, we will be taking to the picket lines again.”

“They’re being denied their right to choose or to have their own union. I really think they should be in a position to exercise their own choice in relation to that, and not be dictated to by either the HSE or the Minister.

“Unfortunately, whether it’s the ambulance drivers or the nurses, the Government needs to take seriously the fact that there are a number of genuine and legitimate issues across the sector, in terms of pay and conditions and representation.”