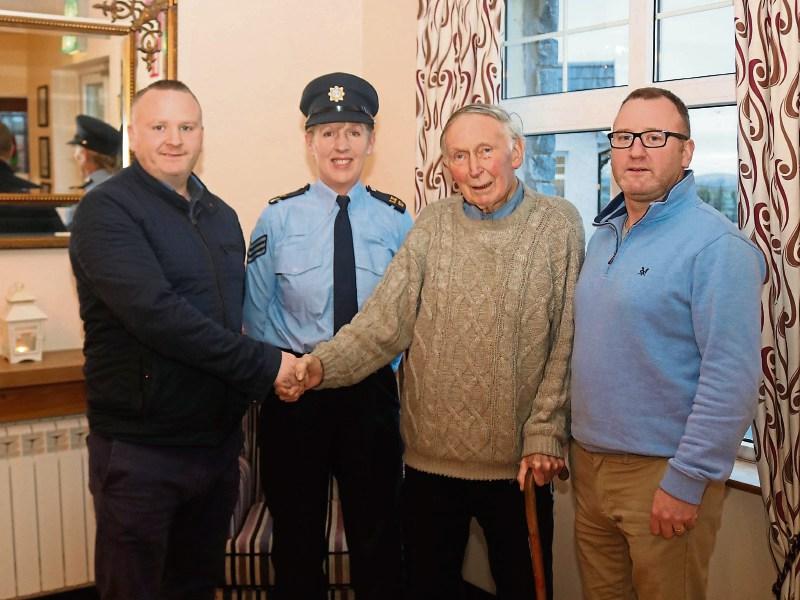 A COUNTY Limerick garda sergeant has praised two brothers, who put their own lives on the line to rescue an elderly gentleman from a burning car.

Sergeant Helen Holden said what Eugene and Marcus Ryan “Alec”, from Doon, did when they came upon a crash was “heroic”.

The two got out of their vehicle at the scene of a two car collision on the road between Cappamore and Doon. One car was on the road while the other was on its side in a ditch. The engine was on fire. They climbed up on the car, managed to open the passenger door and pulled Paddy McCarthy, aged in his eighties, out.

Detective Sergeant Ted Riordan, who was off-duty, had arrived in the meantime. They handed Mr McCarthy down to Det Sgt Riordan and the three brought him to safety.

Sgt Holden said she was in Cappamore garda station when the call came in at around 7pm on Friday, January 4.

“I flew over and at that stage the car was a complete inferno. They are underestimating what they did. It says absolute volumes about their character that they got out and had the presence of mind to pull Paddy out when a car is burning. They saved his life,” said Sgt Holden.

Det Sgt Riordan described it as “heroism”. “It would have been a different result had they not intervened, most definitely,” he said.

Eugene Ryan, aged 40, modestly said, “If we weren’t there somebody else would have done it”.

“Myself and Marcus jumped up on the passenger side of the car. We struggled to get the door open because all the weight was pushing down against us. Paddy was down at the bottom. He was able to raise up his hands and we pulled him out. We passed him down to Ted and got him away from the danger zone,” said Mr Ryan. They did all this in the pitch black while smoke filled their nostrils. The tank full of petrol could have exploded at any second.

Marcus Ryan, 35, is as understated as his brother. “It was lucky enough that we landed on, were able to give him a hand and make sure nothing worse happened. That’s all there is too it,” said Mr Ryan.

Both were surprised to later learn Mr McCarthy’s age because they said he is a “very fit and tough man”.  The Ryan brothers called to see him in St Michael’s Nursing Home in Caherconlish where he is recovering from a broken sternum sustained during the crash. The two say they are thankful that Paddy and the lady in the other car didn’t suffer more serious injuries.

Mr McCarthy, from Cappamore, said: “I would like to thank them for their bravery and saving my life.”

His brother, Roger, said it was a “wonderful deed they did”.

“They are very unassuming and don’t want any glory. I was very impressed by the risks they took to save my brother,” said Mr McCarthy, who also thanked gardai, fire brigade and ambulance personnel.