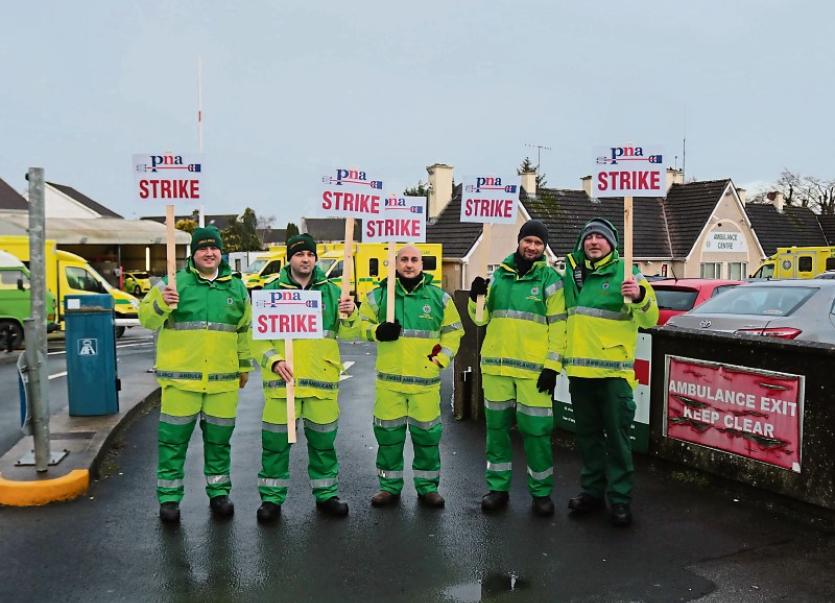 AROUND 30 ambulance personnel in Limerick have warned that another all-day strike will take place if the HSE does not recognise their union.

Members of the National Ambulance Service Representatives Association (Nasra), which is affiliated to the Psychiatric Nursing Association (PNA), have convened a nationwide strike at ambulance bases this Tuesday.

A spokesperson for the local Nasra branch, Liam Moore, said that they are holding their protest at the St Nessan’s Road base--across from University Hospital Limerick--in response to the HSE not recognising their union.

The ambulance personnel lined up outside the gates of the base at 6.45am, and will conclude the picket at 5pm.

Mr Moore said that “all contingencies” are in place for the day, and that all emergency calls will be covered by paramedics.

There are several reports that members of the Defence Forces are on-call to provide assistance to any emergency calls from patients nationwide.

When asked if there was specific cover for Limerick, a spokesperson for the Defence Forces said:

“Following the receipt of an Aid To the Civil Authority (ATCA) request, Óglaigh na hÉireann will provide cover to the National Ambulance Service (NAS) during the industrial action today through the provision of Defence Forces Advanced Paramedics, Paramedics and ambulances.

“Defence Forces ambulances and crew will be based in the eastern and southern regions as requested by the NAS.”

However, Mr Moore, said there is “absolutely no need” for the Defence Forces in Limerick as “our crew will be handling all the emergency calls”.

He added: “Our message is very clear. We are not asking for money. All we want the HSE to do is to recognise our union and sit down and talk with us. That’s all we want. If they don’t come to the table after today, we will be taking to the picket lines again.”

Supporting Nasra at the picket line this Tuesday morning, Fianna Fail TD Niall Collins said they “have a legitimate grievance”.

“They’re being denied their right to choose or to have their own union. I really think they should be in a position to exercise their own choice in relation to that, and not be dictated to by either the HSE or the Minister.

“Unfortunately, whether it’s the ambulance drivers or the nurses, the Government needs to take seriously the fact that there are a number of genuine and legitimate issues across the sector, in terms of pay and conditions and representation.

“And until the Government takes a grown-up attitude to these issues, we are going to continue to be dogged with industrial relations issues,” he said.