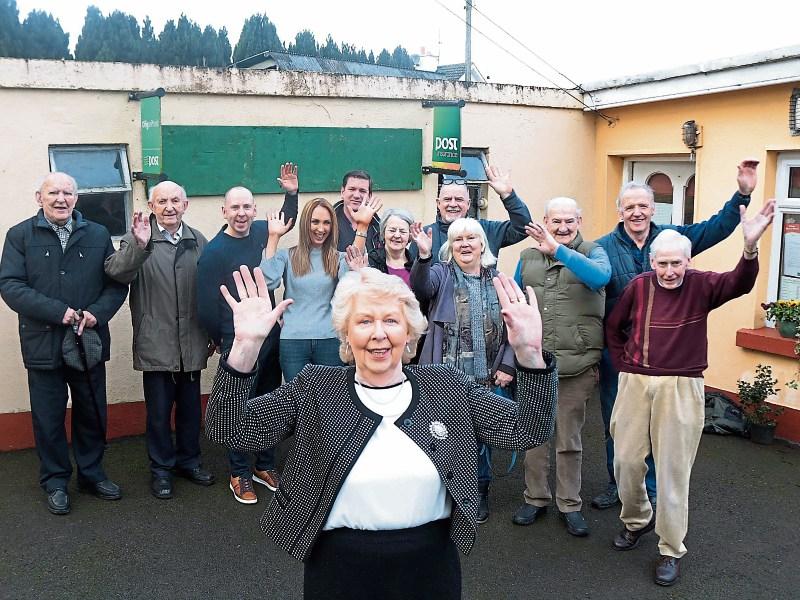 Dromkeen has lost more than its post office, it has lost the kindness of Mary McKenna behind the counter

THE DOOR of Dromkeen Post Office closed for the final time this Wednesday and with it went a way of life.

Locals lost much more than a premises, they lost their postmistress, Mary McKenna. If an elderly person didn’t collect their pension on a Friday, Mary would send her brother to check that they were OK.

Mary, née Redfearn, loves her job and her customers so much that at one point she didn’t take a holiday for 22 years in a row. The 69-year-old didn’t actually want to retire but her son, Tony, said she really had “no option”. It follows the retirement package hammered out last year between An Post and the Irish Postmasters Union.

Friday was the last pension day in Dromkeen. The Leader visited the post office attached to a thatched cottage - the only one of its kind in Europe believes Mary’s brother, Packie.

Located on a quiet road off the N24, birds are chirping and spring is in the air despite it being the middle of January. Inside, there is a vase full of flowers and a poster of our All-Ireland hurling champions.

Sitting behind the counter, where she has sat for half a century, is Mary. Her mother, Mary Redfearn, took over the Post Office contract from Packie Hayes, of Oyster Ballroom fame, in 1968.

“I was born and reared in this house. I started when I was 19. I was on the switchboard as well as the counter - you needed two. I used work from 8 in the morning until 10 at night,” said Mary. It is hard to believe now as we all have smartphones that phone calls had to be manually connected with cords on a board. She gave 11 years on the switchboard before it went automatic. Mary and her mum then focused solely on the post office.

She says it is amazing how things have changed over the years and all the services post offices offer now. But one thing never changed and that was Mary’s warm smile when you came in the door.

Sadly, she lost her husband, Liam, in 1993. Her children - Tony and Shirley - were only ten and eight at the time. Two years later her mother, who handed over the post office to her in 1979, died. Mary also cared for her sister, Noreen, who had MS and was confined to a wheelchair.

“I just didn’t bother taking one. I loved being in the post office, loved my customers and I hated being gone. I had a lovely life here. I really enjoyed it,” said Mary, who was given great support by her two brothers - Packie and the late John - and her sister-in-law, Breda. Daughter Shirley is also a dab hand behind the counter.

Mary says she didn’t want to close it.

“I don’t actually know would I ever have given it up. They gave me the redundancy, they gave me the option but the new contract is so different,” said Mary.

Tony said there was really “no option” to continue as is it is a two or three year contract with no guarantees for the future. Mary wasn’t sure what she was going to do on Thursday morning with no post office to open.

“I will probably get out of bed and automatically think to come down here. It is just my life. I know nothing else but this since I was 19 years of age. I am 69 now,” said Mary, who certainly doesn’t look it.

There’s a knock on the door of the thatched cottage where we are chatting and Jimmy Blackwell said: “I just wanted to say thanks for being so polite and kind.”

“It was a pleasure serving you,” said Mary, who had the hankie at hand in case it
was needed.

“I am going to miss my customers so much. They are so sincere and so trustworthy, I really wish them well. I will be meeting them out and about. I often gave out a hundred or one time two hundred too much and they always came back to me. They are the salt of the earth,” said Mary.

Her fondness for her customers is exemplified by the story told by her brother, Packie.

After collecting her pension and her husband’s, Bridie Hartnett, from Kilteely, said they are going to miss Mary “very much”.

“She is a lovely person, very pleasant and very helpful. We came to Dromkeen after Kilteely Post Office closed eight or nine years ago. This is my second post office closing, I’m going to Oola now. It is a big loss to us because it was so near and Mary is a real lady,” said Bridie.

Tony Tuohy, from down the road, said it is a “massive loss” to the area.

“It was lovely to come in here. You always got a big smile from Mary and you felt better leaving than you did coming in - she would cheer you up which meant a lot. There is a lifetime of service from the Redfearn family gone in here. It is a sad day,” said Tony.

Despite having a touch of flu, one of Mary’s oldest customers Joe Rodahan came down.

The 93-year-old said he has been going to Dromkeen Post Office since he was 65.

“I’ve a lot of money taken,” he laughed.

“You couldn’t meet nicer than Mary. I’m sorry to see her go. She’s very obliging, any problem you’d have she’d fix it up. I wish her the best,” said Joe.

“All the years I’m going in and out there and you’d never hear Mary talking about the previous person. You never knew anybody else’s business - she is dead straight,” said Mike.

Son and daughter, Tony and Shirley don’t know what she is going to do now as they say she “loves being busy”.

Shirley said: “I’m getting married in September so that is going to keep her busy for a few months. It will be hard for her to come down in the morning and not do anything. She would have worked until she is 90”.

Tony says the closure of Dromkeen Post Office will be a big loss to her mum and all the community.

Post offices in the future will offer many new and excellent services but none that will match the service of Mary McKenna in Dromkeen.