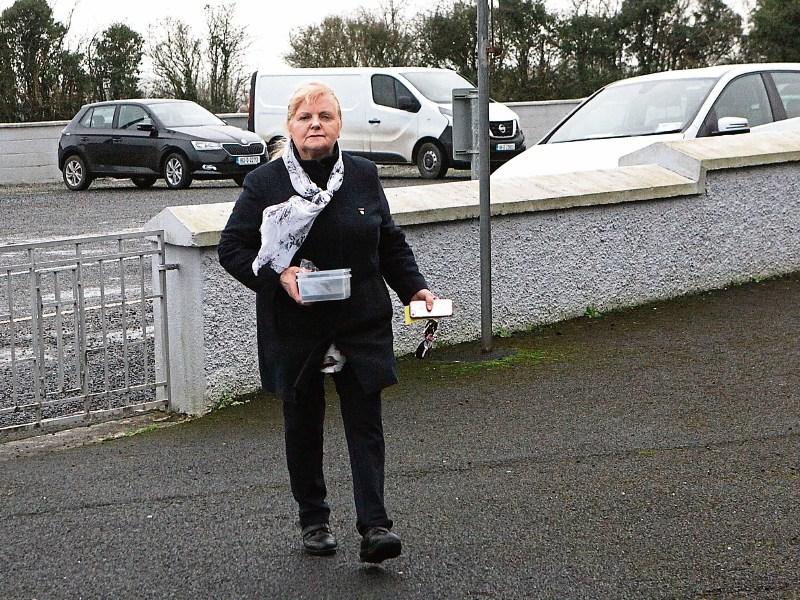 Eileen O'Riordan, mother of the late Dolores, arriving at Ballybricken Church this Sunday for her daughter's anniversary Mass Picture:Dave Gaynor

PRAYERS were offered up for the three children of the late Dolores O’Riordan at a Mass to mark the first anniversary of her death.

Family, friends and neighbours of the late Cranberries frontwoman joined band members and fans in the pews of St Ailbe's Church in Ballybricken for 11am Mass this Sunday where the singer’s three children, who are currently in Canada, were prayed for.

“We pray today for the repose of the soul of Dolores and we will keep in our prayers Taylor, Mollie and Dakota, Dolores’ children, for whom this time is also a difficult one. May the risen Christ continue to support them in their grief and in their lives,” said  Fr James Walton, PP of Ballybricken and Bohermore who concelebrated the Mass with Fr Anthony Keane of Glenstal Abbey.

Some fans had made the journey from London specifically to mark the sad passing of the mother-of-three on January 15 of last year.

Dolores’ mother Eileen arrived early at the rural County Limerick church to make sure everything was perfect for the anniversary Mass. Eileen is the Eucharistic Minister, reader, singer and sacristan at the church and she sang a number of hymns accompanied by Dolores’ niece Katie.

“The parish of Ballybricken is considered by some to be in the middle of nowhere,” said Fr Walton in his homily which he dedicated entirely to remembering Dolores.

“It is the only parish in our archdiocese to have no village, no nameplate. It would be hard to find it on a roadmap unless you knew where you were going. And yet, over the past year, by various means such as Google Maps hundreds of people have been visiting this church to pray for Dolores and also make their way to Caherelly Cemetery to pay their respects to her and to leave a memento of their visit.”

Fr Walton described how Dolores’ life had brought “joy and solace and inspiration to the lives of so many people and continues to do so”.

He explained how Dolores’ voice and her music was “a gift to her native county of Limerick and to the world” and spoke of how she played her own unique part in the Limerick hurlers’ All-Ireland victory last August after 45 years of waiting.

“Dolores was a force of nature. Her rise to stardom gave a huge amount of belief to young people at that time. It was reflected in the belief of the Limerick hurling team to win the All-Ireland final last year after 45 years. That belief can also be epitomised in the song Dreams, the unofficial anthem of Limerick hurling, in the words, And they'll come true, Impossible not to do.”

The anniversary Mass ended in a round of applause on the closing note of May the Road Rise to Meet You which was sung beautifully by Dolores’ niece Katie.

“May the rain fall softly on your fields

and until we meet again

may you keep safe

in the gentle loving arms of God”

Among those listening intently was Enrique Rivas, 32,  originally from Spain who had made the journey from London for the anniversary Mass.

“I was in St Joseph’s Cathedral last year and I decided to come again one year after to pay my respects. Since I was 10 or 11 years old I grew up listening to her music, so yeah, it’s really emotional for me to come here. It was kind of like to close the year to come back to this place. I arrived yesterday and stayed in Limerick and I go back this evening,” said Enrique.

He hoped to visit Dolores’ grave before he departed but wanted to give the family some space first.

“I was there last July. I left some flowers and today I will leave my bandana.”