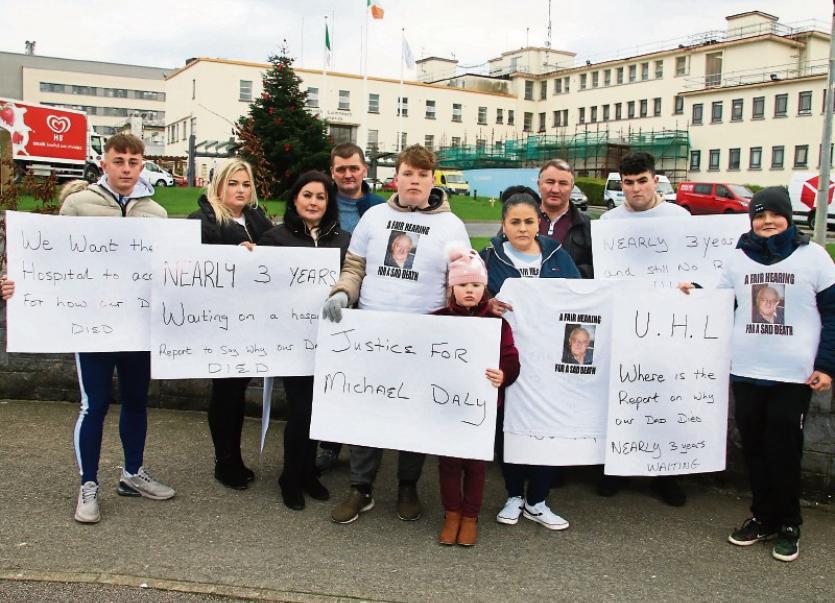 THE FAMILY of a Limerick man, who died almost nine years ago, have pledged to stage weekly peaceful protests outside University Hospital Limerick over “unacceptable delays” with the results of an investigation into his death.

Following a 2013 review carried out by University Hospital Limerick into the circumstances of his death, deemed a “whitewash” by Mr Daly’s son Michael Daly Jr, a further external investigation was commissioned by the hospital.

However, according to Mr Daly Jr, the family has yet to receive the findings of this report.

“The hospital has taken five years to do a review and its not acceptable,” Mr Daly Jr said.

“We are not putting up with it anymore. My mother is nearly 70 years of age and we'd like to see justice while she is alive."

A range of different investigations into the death of his father have been completed, Mr Daly added.

The Limerick Leader reported in September 2012 that a verdict of natural causes was returned at Limerick Coroner’s Court at the inquest.

Mr Daly Jnr, who was unhappy with the verdict and led an appeal with his family to have the inquest reopened.

In March 2017, coroner John McNamara confirmed to the family that a second inquest was to be reopened.

A criminal investigation into the circumstances of the late Mr Daly’s death was also launched in 2017.

It is likely that the second inquest will take place after gardai conclude their investigations.

Members of the late Mr Daly’s family gathered outside the hospital in Dooradoyle last Friday, bearing banners that read ‘Justice for Michael Daly’ and ‘Nearly three years waiting on a hospital report to say why our Dad died.’

Members of Mr Daly’s family also wore t-shirts bearing a photograph of Mr Daly that read ‘A fair hearing for a sad death.’

The family has pledged to protest at the hospital weekly “until they have answers”.

They are sharing their campaign on social media with the tag ‘#justiceformichaeldaly’, Mr Daly Jr added.

A University Hospital Limerick spokesperson said: “UL Hospitals commissioned an external and independent review to be conducted by an expert in the field.”

“The Hospital has impressed upon the reviewer its desire to have a report as early as possible and it would be inappropriate for the hospital to comment any further.”