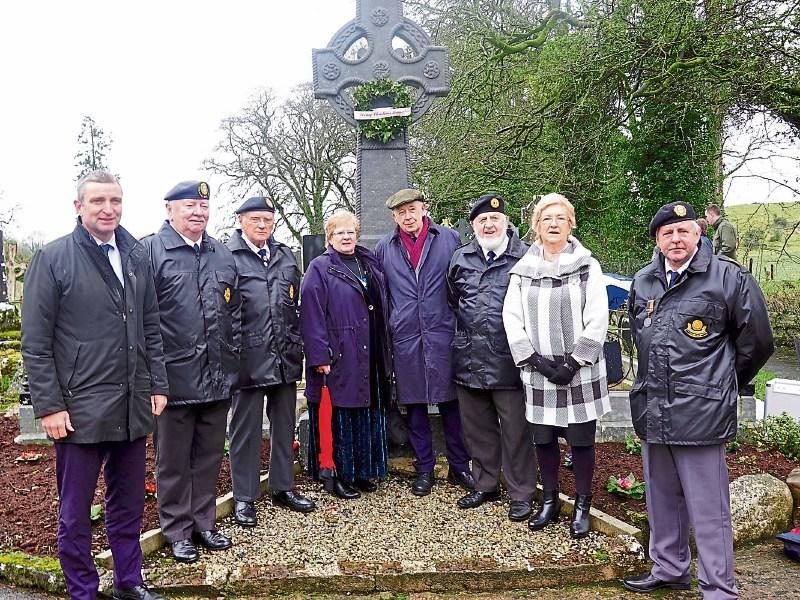 MEN, women and children gathered on Sunday in the Republican plot in Grange to remember the gallant five volunteers from the East Limerick Brigade, who gave their lives in the cause of Irish freedom at Caherguillamore House some 98 years ago – December 27, 1920.

Deputy Niall Collins said he was “honoured” to give the oration at the annual commemoration. He quoted the late President of Ireland, Sean T O’Ceallaigh who said, “County Limerick has set an all-Ireland lead in discharging its duty to our patriot dead” when he unveiled the old IRA memorial in Newcastle West on Easter Sunday in 1951.

“The Sean Wall Restoration Company has been to the forefront in that regard. So may the names and sacrifices of those gallant men so brutally slain at the Caherguillamore House ambush that December 1920 night long be remembered,” said Deputy Collins, who read out the names.

“We join with you in recalling with pride your noble forebears who gave their all for the freedom we enjoy today. To the descendants of all the 250 men and women who congregated at Caherguillamore House on that eventful night may I say you also have every reason to remember them with pride. They rallied to the cause. They congregated at Caherguillamore House to raise funds for the East Limerick Brigade.

“Funds so desperately needed to acquire badly needed active service rifles. Rifles to replace the small store of sporting guns and shotguns with which the East Limerick Brigade sought to challenge the might of the British Empire. Here in east Limerick was the place where the first flying column was formed. Your forebears gathered there for a social occasion which culminated in disaster,” said Deputy Collins.

Little did they anticipate the brutality, savagery and subsequent lengthy incarceration that many of those present endured in Limerick prison and thereafter in Spike Island and in Portsmouth and Dartmoor jails.

“Your forebears who paid an admission charge of four shillings at the Caherguillamore House ‘social’ helped in no small way in providing the fire power and weaponry which helped the East Limerick Brigade develop into one of the leading fighting units in the War of Independence.

“While we honour the memory of those who died, let us not forget the deeds, bravery and suffering of those who survived that ‘social in hell’. Many of them seriously wounded and bayoneted as well.”

“I have already noted the fact that East Limerick was the place where the first Flying Column was formed. Perhaps it is difficult for us, some 98 years on, to appreciate the then reluctance on the part of the volunteers to accept the revolutionary concept of waging guerrilla warfare on the British forces. Sean Wall’s backing of the Active Service Concept – also known as The Flying Columns – and its initiation by the Galtee Battalion led the way.

“When we, as a nation, come to honour the centenary of the War of Independence I have no doubt that the Caherguillamore story will feature prominently in all branches of the Irish media.

“What transpired when the British forces some hundreds strong – placed a ring of steel around Caherguillamore House and in Grange of that eventful night will make riveting viewing and reading.”

What was intended to be a social occasion a supper dance turned into a “night of hell”.

“So thoroughly were the plans made – the British forces – black and tans, auxiliaries and RIC – even had brought along bloodhounds to track down any volunteers who might succeed in escaping.

“The ladies in attendance were imprisoned in Caherguillamore House and not released until the following day. The dead and some 100 men - battered, bruised, bayoneted, severely wounded - were taken by convoy to Limerick and imprisoned in what is now Sarsfield Barracks and later onto Limerick gaol. Thereafter some 59 attendees were court marshalled – sentenced to 10 years penal servitude and transported by destroyer from Limerick Docks once again to serve their sentences in British gaols.”

Deputy Collins said the history of Limerick’s Fight for Freedom is a treasure trove of opportunity for print media, radio and television.

“Finally, like many who have had the honour of speaking at this commemorative service in the past I am deeply conscious of the fact that this is not a political occasion. Nationalism and patriotism transcends politics,” he concluded.