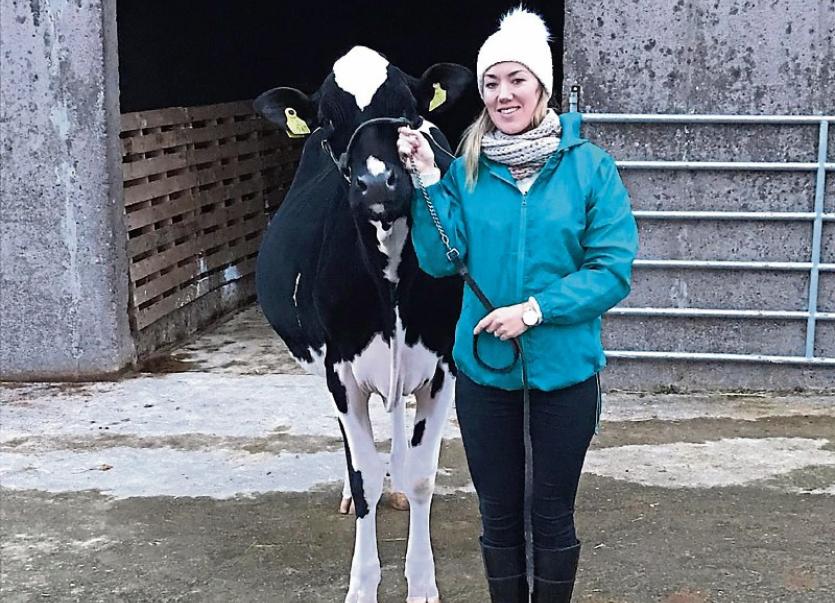 A COUPLE who went Dutch on a calf in 2017 have now seen the Friesian heifer go on to win a prestigious title in Holland.

Tadhg Bourke, a renowned breeder from Kilfinny, Adare, gave his then girlfriend and now wife, Veronica, a half share in a calf that was born out of one of his cows in March 2017.

“The family all have their names starting with P so Veronica picked the name Prosecco as she’s a fan!” joked Tadhg.

They subsequently sold Prosecco to a purchaser in Holland and corks were popped when they heard she was named junior champion of the Dutch National Show in Zwolle this month.

Tadhg, a veterinary surgeon, said it was obvious right from the start that the calf was a special one.

“Her family line goes back to an American farm in Pennsylvania and there are generations of winners in there.

Her dam Leagh Mascalese Pledge is classified vg88 in her second lactation and is due with her third calf in March to Doorman. She was acquired privately from Tim Fitzmaurice's Leagh herd in Kerry.

“Her granddam also owned by Tim is the UK and Ireland's highest star brood cow ALH Polly Ex92 30. Behind this are a line of internationally known cows such as Pledge Ex95, Promis Ex95 and Pala Ex94,” said Tadhg.

This year the couple managed to rent a small yard to keep a few of their own calves down with them in Cork. Tadhg is a partner in Glenbower Veterinary, Killeagh, County Cork, while Veronica works in St Mary’s Secondary School in Midleton.

“Prosecco was the main driver for renting the yard as it was obvious she had potential - it just needed to be realised. Quite a bit of work went into getting her right, so much so that before heading to our wedding in June she even got a wash that morning!”  smiled Tadhg.

It was at this stage she started getting some attention from abroad as a result of some  Facebook marketing.

“In the end it was a tough decision but we sold her to a Dutch farmer,” said Tadhg.

While the price struck remains undisclosed the fact the new owner sent over a lorry especially to collect her in October tell its own story.

The question is did Veronica get half of the sale price, which would certainly buy a lot of cases of Prosecco Superiore DOCG.

“That’s not the first time I’ve been asked that! We’re currently on the look out for some land to start our own farm and to build a house so that’s what the money is destined for at the moment.

“Having gotten married this year and become a partner in the vet practice it was certainly nice to get the money into the account. Being honest it really was with a view to buying some land and settling down that we sold her - it was a very tough decision,” said Tadhg.

However, they were delighted to hear about Prosecco’s success in Holland.

“We have been lucky to have had some success in Ireland including overall Millstreet national champion in 2015 but to win on a European stage is something very special for us. We even gave Prosecco’s mum some extra feeding over the weekend as a little thank you. We’re just hoping she’ll have a girl for us when she gives birth again in March,” said Tadhg. Now that would be worth a toast.