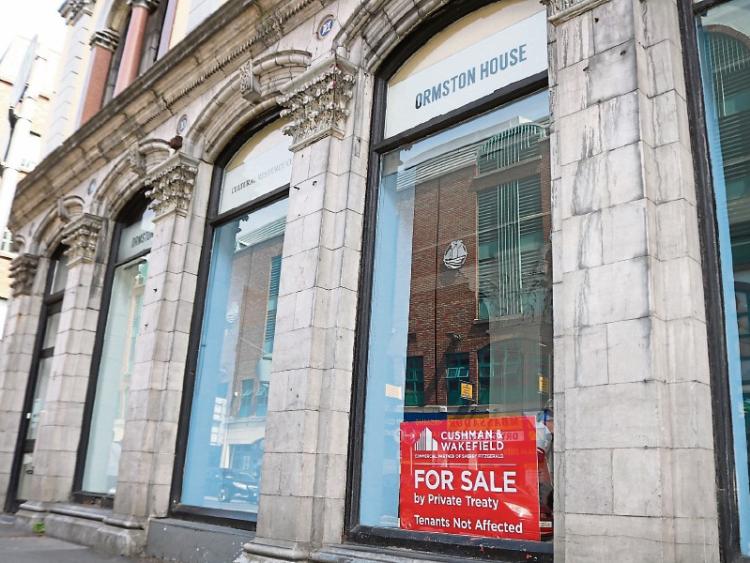 Ormston House: To go for auction this week

THE ORMSTON House saga may soon come to an end, as the renowned cultural centre in Limerick goes under the hammer later this week.

The prominent Patrick Street site has been through a turbulent period for close to two years, as question marks have hung over its future existence.

Ormston House is now closed for the winter period as temperatures are too cold to operate. Though it has been awarded more than €12,500 in grants for the purchase and installation of a heating system, it cannot draw down the funds due to tenancy issues.

The Limerick Leader first reported in July that US vulture fund Cerberus Capital Management, which purchased the loan book from the National Asset Management Agency (Nama) in 2017, was close to striking a deal on the site in a matter of weeks.

Now it has emerged that the Ormston House - comprising 9 and 10 Patrick Street - and neighbours 11 Patrick Street, will go under the hammer on BidX1 this Thursday afternoon.

BidX1 describes the site as a “city centre commercial investment” with a guiding price of €450,000. It is expected to sell for north of that price.

It said that 9 and 10 are let to Limerick City and County Council, with a one-year licence from July 11, 2011, while there is a 35-year lease on the neighbouring retail unit since September 2004.

In October, the directors of Ormston House have indicated they were seeking a long-term lease in order to continue their community engagement programmes, which have been suspended in 2019.

Co-director Mary Conlon previously said their focus in 2019 is to secure the venue on Patrick Street, specifically for the community engagement programme.

“We are currently booked through to the end of the year and we are turning away requests almost on a daily basis. There is huge demand for space to host and support meetings, events, projects, and other activities mostly for or by young people in the city.”

She said at the time they were looking at alternative sites in the city, but there are “no solutions forthcoming”.

“We have been given permission to pitch for a derelict building with great potential owned by Limerick City and County Council. We are waiting for the briefing document to proceed to open competition.”

Ms Conlon said Ormston will continue with its professional development strand of the programme, which will include its membership scheme and a new adult education and resource programme with national partners.

She added securing tenancy is “vital for any arts and culture organisation to create a sustainable model and new jobs”.