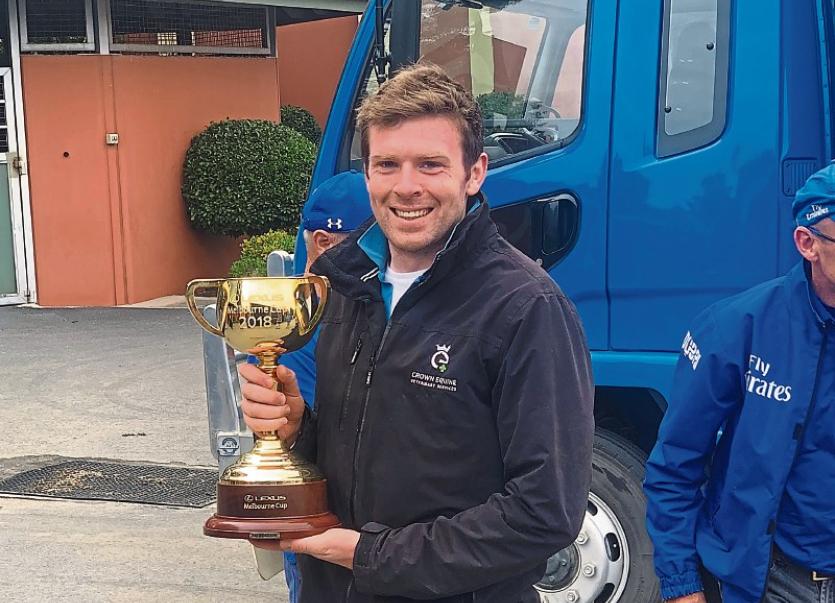 EVERYTHING Limerick touches seems to turn to sporting gold in 2018!

Niall Hanly, from Ballysimon,  is a veterinary surgeon for Crown Equine Veterinary Services in Melbourne, Australia and he and his colleagues were responsible for the care of 2018 Melbourne Cup winner Cross Counter, trained by Charlie Appleby.

The Limerick hurlers brought the Liam MacCarthy Cup home after 45 years but this was Sheikh Mohammed’s first Melbourne Cup winner.

“It was incredible to watch! I’ve worked with some great horses including Winx, Redzel and Estijaab in Sydney but to be so closely involved with a horse in this race, where horses had travelled from all over the world to compete was a huge deal.

“I couldn't believe my eyes when I saw Chris – as the lads in the yard call him - coming up on the outside leaving all the others behind him. The next thing I know I’m in the parade ring with Charlie Appleby hugging and high fiving,” smiled Niall, who is a son of well known Limerick auctioneer, Bill Hanly.

Niall and his fellow vets played a crucial role in ensuring that Cross Counter even made it in to the gates. The four-year-old sustained a cut with the stable reporting that standard treatment would see him miss at least two days of work.

“With three weeks until the Melbourne Cup, Cross Counter sustained a cut to his leg, which did require some veterinary attention. The horse had to miss a few days of training but this in hindsight was only a minor setback in his preparation.

“We were also required to oversee that the horses met the quarantine requirements to enter Australia. Our main role is to make sure Godolphin's horses are fit and healthy to perform to the best of their ability on race day,” explained Niall.

That they did as Cross Counter romped home at 7/1 to win the $4 million first prize. The Melbourne Cup is called the race that stops a nation. Niall says it does exactly that.

“It's impossible to describe the magnitude of the Melbourne Cup. The whole state of Victoria has a Bank Holiday for it. It’s watched all over the world. I’m quite privileged to be given the opportunity to work with horses involved in these races,” said Niall, who has been working in Australia since June 2017.

“I spent my first 12 months in New South Wales and I moved to Melbourne four months ago where I'm gaining great experience and dealing with some very high profile clients,” he added.

The apple doesn’t fall far from the tree as Niall’s proud dad, Bill, is chairman of the showjumping section at Limerick Show and has been involved with the event since he was 14. Hanly Donnellan Auctioneers sponsored the Grand Prix this year. The winner is presented with the Limerick Leader Cup.

Niall said they always had a few animals at home and “I grew up riding ponies and showjumping around Limerick and the surrounding areas”.

That love of everything equine brought him all the way to the Melbourne Cup winners enclosure.