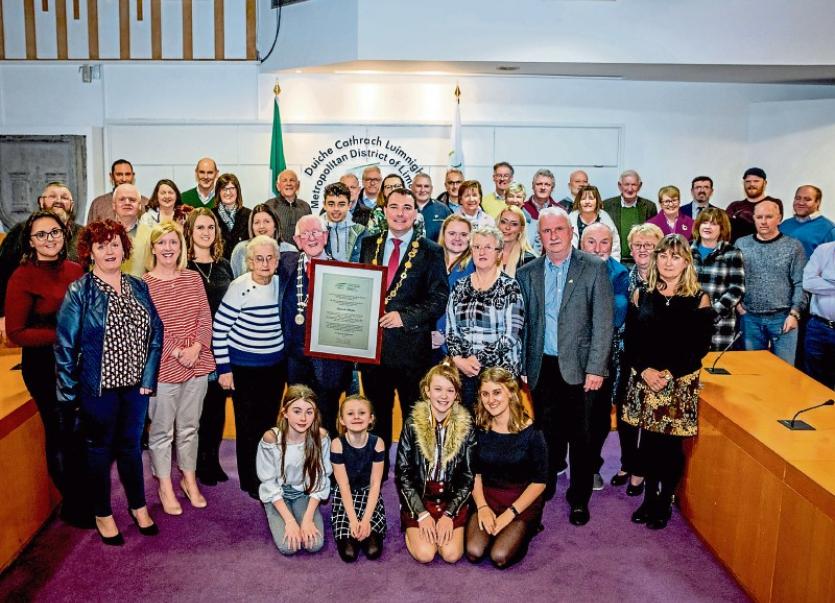 Pa Phelan, pictured with Mayor James Collins and his many bandmates, friends and family at his reception in City Hall

THERE was a lovely surprise this week as the man instrumental in the recent success of the Boherbuoy Band was honoured with a surprise reception.

Pa Phelan, 89, arrived at City Hall this week, expecting the whole band, which he is president of, to be recognised by Mayor James Collins.

Instead, he was left “stunned and humbled” when he was told the night belonged to him.

This is a lovely moment: Boherbuoy Band president Pa Phelan thought reception from #LimerickMayor was for the whole band - that is until @jamesjcollins says it is, in fact, in honour of his 78 years service. @Limerick_Leader pic.twitter.com/ikFPEQcr1O

“I didn’t expect this,” he smiled. “I knew there was something going on. I’d like to thank each and every one of you, but especially my late father. He was the greatest man.”

Pa is a stalwart of the Boherbuoy Band, which at 169 years going strong, is the oldest band in the city.

Born in Stokes Lane, Pa has been a member of the band for 78 years, joining as a fresh-faced seven-year-old.

Declan Hickey, vice-president of the band, said: “This is a very richly deserved honour. Pa is a marvellous family man. You can see all his children, his family, friends and relatives have come to honour him. It shows the high esteem he is held in by his own family.”

Declan added Pa is a great man to teach youngsters coming into the band – and come rain or shine, the accomplished euphonium, trombone and drum player will turn up to practice.

A humbled Pa said he is just giving back to a band which has given him so much over the years.

“I don’t think I ever had an argument with anyone. Everyone is so friendly. It’s a wonderful band to be a part of,” he said.

“When I joined, I learnt from some wonderful people. They were poor men, but they were great musicians. I am so thankful for the band – and I am only returning what I was given.”

Mayor Collins said: “Your contribution with the Boherbuoy Band, which was founded in 1850 and one of the oldest band in Ireland, is recognised not only by the people of Limerick, but also at national level. We owe a debt of gratitude to the Boherbuoy Band.”

He said the group – which has its band hall in Lord Edward Street – provided the soundtrack to his youth.

“We all grew up to the sound of the Boherbuoy Band. My parents owned the Railway Hotel. As a young boy, I’d be brought in. I’d have many an hour out and about in the park, and I was always fascinated when we did come across the Boherbuoy Band. They all had a place in my heart, as they brought me back to my childhood.”

A number of representatives paid tribute to Pa, including Cllr Kieran O’Hanlon, a friend of his for 60 years.

He said: “Playing music must be good for the heart and soul, and Pa is proof of this. The Phelan family particularly have made a huge contribution to local life in the St Patrick’s and St John’s parish. It’s great you are being honoured. I know you’re a great family man. Long may you continue!”