Portrait of an artist: John Shinnors on his life and craft ahead of new book release 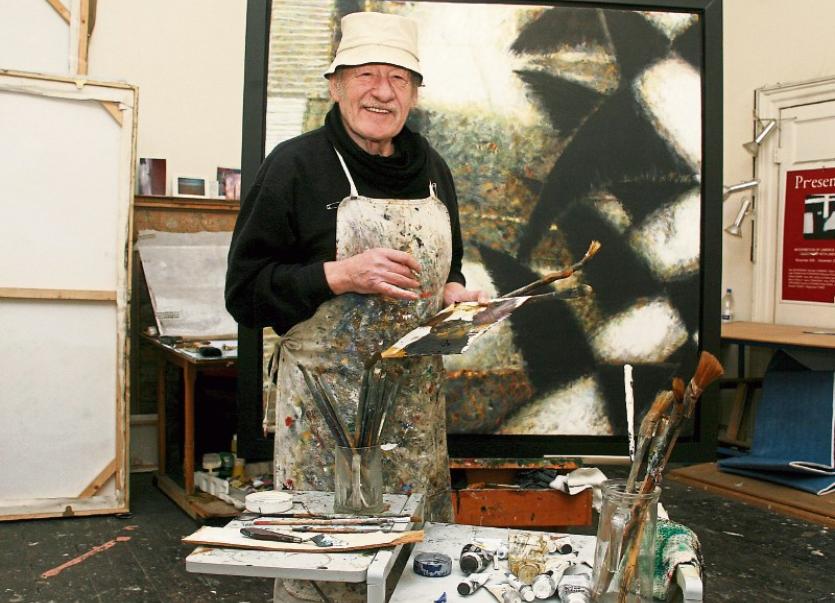 A portrait of the artist: John Shinnors in his O’Connell Street studio, finishing one of his trademark works Picture: Adrian Butler

JOHN SHINNORS was by his easel, poised to paint an image of a woman carrying John the Baptist heads in a plastic bag when it dawned on him that he was an illustrator, just like the ones behind the famous Lady Bird books that his children were reading.

“I just questioned myself. I can paint anything. I could forge Vermeer if you wanted it, and you probably couldn’t tell the difference. And so can hundreds of thousands of artists who are representational.”

That was how the 68-year-old saw himself, as “representational”, before his brush strokes evolved into the signature, abstract Shinnors motifs, often in triptych palette, with which the art world has become so familiar and fetched upwards of €70,000 on the open market at one time.

Speaking at an intimate talk in Ormston House recently, the Limerick native revealed a self-portrait of an artist who had, and not so long ago, been choked with the malady of “painter’s block”, as he puts it.

Shinnors was open, unrestrained and unapologetic about this “problematic” experience. After it all, it was what led to his upcoming book, Adult Reading at Artist’s Bedtime, an exploration of the artist’s life through the medium of sketches.

He had an idea of the title, but had no book. That all changed when he discovered compressed charcoal pencils around a year and a half ago.

And upon returning to the drawing board, figuratively and literally, that is when “memories of when I was a child and my school days, etc, were coming back”.

There is a variety of memories the acclaimed artist shared with those gathered in Ormston on a Thursday lunchtime to hear Shinnors speak. Included among them are being born at the maternity hospital in Bedford Row and the time his mother had enough of their home in Merchant’s Quay after a rat fell through the ceiling and onto the kitchen table.

But there are more pivotal, deeply-personal experiences resting in the memory of his youth that came to light during this talk in front of more than 20 attentive spectators, all sitting in a circle around the artist.

The first that comes to mind is when Shinnors first walked through the doorways of art college, aged 17, and moved to London over the summer holidays to live with his aunt.

“I said I would go back to the art school after Christmas, you never know. They weren’t checking up on you anyway. I was just one less hippy, but I wasn’t a hippy really. I didn’t like hippies, you know what I mean? They were all over the place, you know, free love and all that stuff,” he recalled.

“I came home that Christmas, and I was back in the house. I was back in my bedroom, and after a day or two I put my hand up on the wardrobe. Before I went to London, I had about 10 rolled up drawings, which I thought were quite good. There were about five life drawings and five from the antique. I put my hand up on the wardrobe and felt nothing, no rolls, but flat pieces of paper, so I scoop them down and there they were, torn in quarters. They were large scale drawings. I wasn’t none too pleased, to tell you the truth.”

He probed his mother about it and she said: “I think you’ll have to ask your father about those, John.”

And though he could never prove that it was his father, he knew “because he was that type of man”.

So one St Stephen’s Night, while walking over Sarsfield Bridge, John noticed he had his father’s favourite briar pipe in his pocket and chucked it into the Shannon.

“I was so enraged at the time. If he was behind me I would have thrown him in, too,” he quipped, drawing laughter.

Educated at CBS Sexton Street and LSAD, he was born in Limerick on April 14, 1950. He made a comeback to the art world in 2017 with his first full collection following a five year hiatus, during which he spent three months in hospital after being knocked down on a motorway.

The abstract artist has created headlines on many occasions for his outspoken nature, including most recently in the Irish Mail on Sunday with his forthright comments about travellers.

The artist’s new book, which will be launched this weekend at the Hunt Museum, comprises half text, half illustration, he explained.

The word ‘illustration’ triggers a question from the audience about his unique, cryptic style, and how that inception occurred.

It was a Friday morning, sometime in the 1980s, and John had left Franciscan Church, only to have his eye caught by a slab of mackerel on a platter across the street.

“I’ve seen mackerel before. I have seen thousands of them. But the design of the mackerel, their colouring, shape, almost Cubist—a style of painting that I never liked—but it had everything that sort of sparked me.”

And with this burst of inspiration, the artist bought three mackerel, hopped on the William Street bus homeward, and placed them outside on a stone wall in order to photograph them. After a cup of tea and a smoke, he noticed that they were gone.

“I even looked up to the sky. Next thing the laurels were moving, and I said: ‘That little bollix’.”

His dog Pig had been in the process of burying the mackerel, but after exhuming them, he painted them during the week.

“You are creative by nature, you will find many avenues to express your creativity. Painting is not only my livelihood, but it’s a process that I totally enjoy. But nothing gives me greater pleasure than say,” pointing to a large space on the wall, “take that wall for example, and to see a painting of mine on that. I derive great satisfaction from that.”

There are two things that don’t satisfy the man, however, and they are electric or digital art and photographs. The idea of the electric image, he says, is alien to him.

“I firmly believe that to create, you create with your hands. The carver carves. The composer uses an instrument, creating compositions. The painter uses the same tools that have been used since the last 500, 600 years. So anything to do with plugging in, it is not creativity to me. I don’t like photographs either!”

As the 30-minute talk drew to a close, a question for the artist was heard: “John. The pipe. Did your dad ever find out about the pipe?”

No, was the answer, though his mother clarified that he “went totally mad for three weeks” searching for it. But, likewise, his father never mentioned the destroyed roll of sketches.

- Adult Reading at Artist’s Bedtime will be launched by poet John Liddy at the Hunt Museum, with a wine reception, at 4pm this Saturday