WATCH: Limerick’s Laurel Hill go all out in claret and green for All-Ireland champions 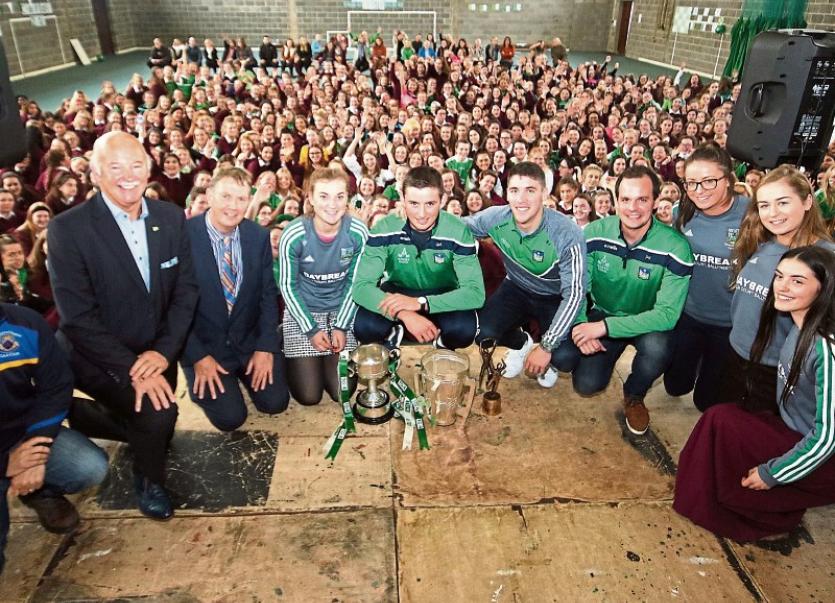 THE triumphant homecoming for the Liam MacCarthy and West County Hotel cups continued at Laurel Hill secondary school this week.

An ocean of the familiar claret mixed with shades of emerald on jerseys, flags and faces bubbled with anticipation to welcome triumphant stars on Monday.

As the hurlers and footballers entered the gymnasium, the champions were met with rapturous applause from the secondary school students.

The cheers dwindled, and the girls then sang a tune that pierced the hearts of the All-Ireland winners.

Niamh Ryan, who plays centre-back for the county as well as teaching Irish and PE in the all-girls school, encouraged all students to find their calling and excel at it.

”Regardless of your field football, camogie, hockey or soccer or academics, music, debating, we’re very strong in all those areas. I know that you know that success isn’t possible without hard work,” Ms Ryan added.

When Ciara Ryan was asked how she managed to balance school, work, and social life in the Q&A, the All-Ireland medal holder responded: ”Make sure you get the hours of study done, even if you stay up to 11 at night just to get those few hours, just stick to the plan and it will work.”

Hurlers Sean Finn and Gearoid Hegarty and coaches Jim Moran and Paul Kinnerk were in attendance and received a heroes reception.

Pat Hartigan, who previously walked the halls of the secondary school as a parent for his two daughters Sally Anne and Faye and was on the winning 1973 team was there too, proving an inspiration for his fellow All-Ireland winners.

“To me, Laurel Hill is the epitome of second level education, my two daughters came here, and they got a great rounding here.

“It made me sad coming here to a degree because it’s been such a while since I came here and now with God’s help, I get to see my granddaughter, Hollie attend here next year,” Mr Hartigan said.

”It’s been an absolute honour to have you all join us, I wish the very best of luck to both the hurlers and the footballers next year,” Mr Cregan concluded.