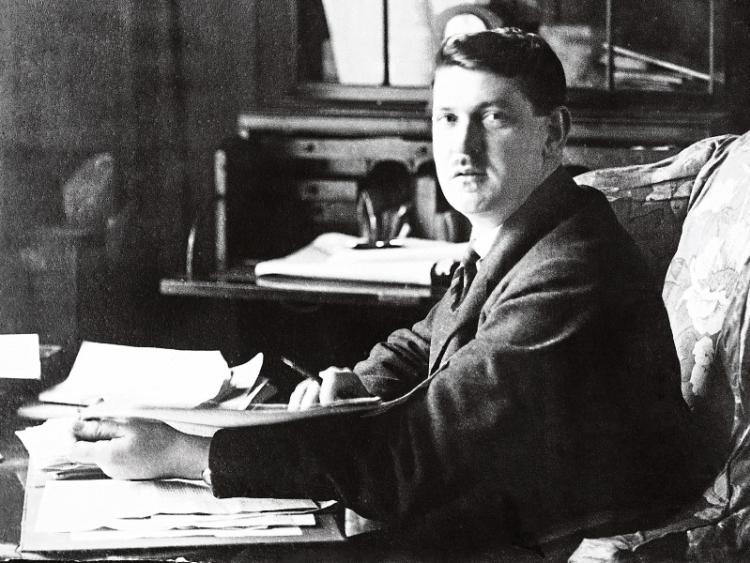 Michael Collins photographed in London during the Treaty negotiations in late 1921. The picture features in the new book

ALMOST a century on, Michael Collins, his life and his death, continue to intrigue.

“We harbour no notion that we will solve the Collins puzzle, unpick the riddle, finally fathom the fascination with this man,” they write in the introduction to Michael Collins, The Man and The Revolution which was launched last month by journalist and author Fintan O’Toole.

“We write, instead, because there are simply more questions to be asked.”

Speaking to the Limerick Leader about the book, Monagea-born William Murphy, who lectures in history at DCU, explained: “We approached him with a set of questions. We didn’t approach him with a set of predetermined answers. We ended up with more questions than answers. If at the end, the reader finishes the book and is asking themselves a lot of questions, wondering about different things, then we would be delighted.

“A lot of new material has emerged and has been released,” William continued. “It was an opportunity to bring some of that to a wider audience.”

“It is not really a straight biography,” he added. “It is a biographical study organised around the eight questions.”

“Hopefully,” said William, “it offers a new way into him.”

There has been a tendency to glorify Collins or regard him as a traitor, he pointed out. But he continued: “We wouldn’t have found it a very interesting project if our purpose was to try to write some biography to explode the myth, to debunk Collins.”

“From our point of view, neither of us was approaching Collins with strong political views,” William made clear. And the book is not about marshalling arguments for one side or the other.

“We didn’t set out to write a Collins like that.”

As the project progressed, he revealed, what became interesting was that the persona was every bit as important as the person, that Collins had an image created for him and was very aware of it and even used it when it was useful to him.

“We were interested in the fact there were many Michael Collins.”

For William, the Collins that he has come to know through his research and writing was a very intelligent, complex, complicated man, sometimes contrary, sometimes self-contradictory. He describes Collins as “a man who organises a revolution from a desk, through letters ”. “He didn’t spend a lot of time in the field himself.”

“I certainly got a sense of knowing him better, of becoming aware how multifaceted he was, of the different types of Michael,” he said.

“One is struck by his extraordinary level of energy. He was definitely ambitious,” William continued.

“He had a cause which he genuinely believed in. He is intelligent. He makes strategic decisions but he is not cynical. He has a very good eye for where power lies in any organisation and a very good sense of how to move to exercise that power. Part of that is networking. He is very good at that. He has very little confidence in people around him to do a job well and he is prepared to take on work when other people around weren’t prepared to do it.

“Hopefully what emerges is a sense of a man who was learning, growing, changing and evolving,” William continued.

For William, one of the most poignant and telling points is that “during the Civil War, Collins and De Valera are remarkably close to each other, much closer than to people on their own side”.

The book also contains a lot of photographs, notes, letters and other material, much of it new, which the authors spent a lot of time tracking down. They add to and illuminate the story which is written in a highly readable and accessible style.

“We would hope fellow academics will read it, that it will be used in the context of history but it is really aimed at the genuine, interested, intelligent reader, that is who we wanted to have a conversation with,” William concluded.

Michael Collins, The Man and The Revolution by Anne Dolan and William Murphy is published in hardback by Collins Press and costs €29.99.