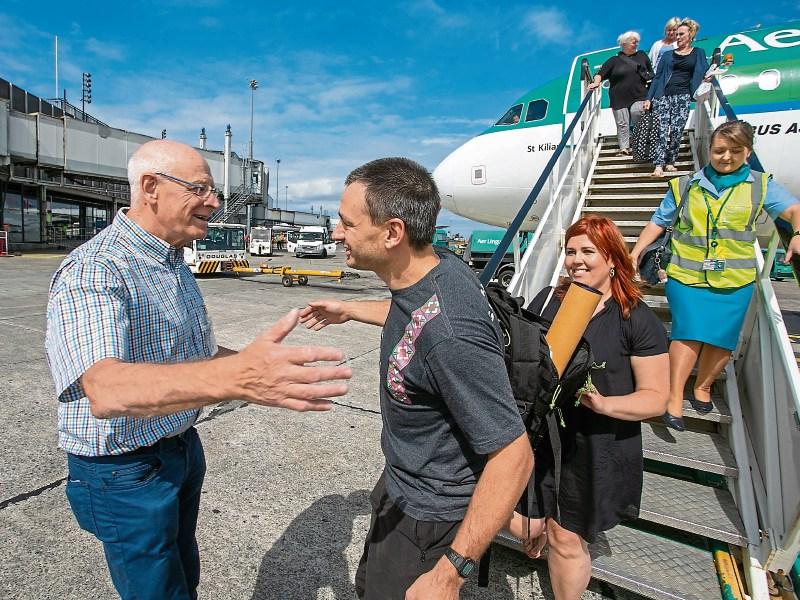 Jim Warny is greeted by family on his arrival back to Shannon Airport after taking part in the Thai cave rescue Picture: Arthur Ellis

THE Clare based diver who took part in the successful Thailand cave rescue is to play himself in a new film about the ‘miracle’ event.

Jim Warny, from Belgium but living in Ennis for the last 15 years, will play a role in scenes that are to be shot at Shannon Airport this Sunday.

The Cave is to retell the story that gripped the world’s attention earlier this year, when 12 young boys and their football coach were trapped in a cave in Thailand following heavy flooding.

Warny was one of an elite multi-national group of divers who volunteered to assist in the unprecedented and highly dangerous rescue mission.

The Cave is written and wirected by Tom Waller, a Thai filmmaker with Irish heritage, who attended a live script read of another film during the recent Richard Harris International Film Festival at the Belltable in Limerick last weekend.

“We want to tell the story of those brave people who selflessly risked their lives to save the boys and their coach. To do it right we need to be as accurate as possible and that is why we are enlisting the help of the real life heroes like Jim and bringing him to Shannon Airport to retell his story,” said Mr Waller.

The film will capture the heroic rescue of the 12 boys aged between 11 and 16 years and their soccer coach who entered the Tham Luang cave in Thailand before being trapped after heavy rains flooded. The world watched and held its breath as efforts to save the team proved extremely difficult, and one rescuer, a former Thai Navy SEAL, sadly lost his life.

However, thanks to a rescue team of 13 international cave divers, including Jim Warny, and five Thai Navy SEALs, they were finally rescued on the 10th July following a dramatic operation.

Filming will take place in Ireland and Thailand until the end of December. The film is expected to be released next year.

Speaking ahead of the film crew’s arrival, Shannon Airport Managing Director Andrew Murphy, said: “We’ve had many great homecomings here in recent years but having an opportunity to honour Jim Warny back in July was truly special. The fact that a film is now being made to commemorate his bravery and that of all of those involved, is a wonderful tribute to a selfless man who risked his own life to save the lives of those children and their coach.

“At that time it was a rescue that captured world attention. Here at the airport we could see that from people who came through the airport, stopping to watch TV news bulletins in our lounge. To have someone living here in Clare involved in this incredible rescue is a tremendous source of pride for us all and we are delighted that the story will now be captured on film for future generations,” he added.