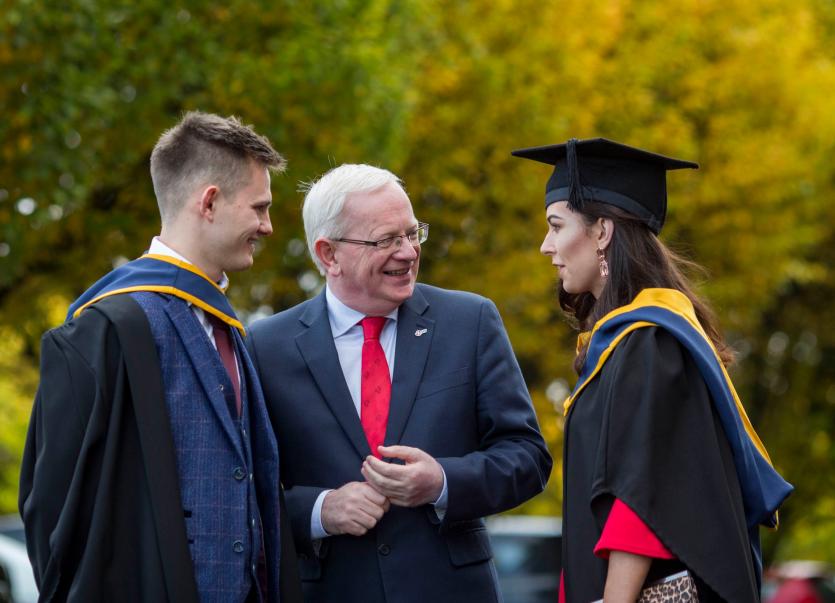 THE President of the Limerick Institute of Technology has challenged the current blueprint for third level education, as he revealed that 95% of last year’s LIT graduating class either went directly into employment or on further study.

At the opening 2018 conferring ceremony in the LIT Moylish Campus this Wednesday, Professor Vincent Cunnane questioned whether the Government’s Hunt Report, first published in 2011, was still relevant for the sector and the challenges it now faces.

According to Prof Cunnane, the Hunt Report outlines Government policy and includes the imperative that institutes of technology should merge, face more international competition, and fundamentally change.

“If 95% of our graduates are in employment or further study, if students are coming to us from diverse backgrounds, if we are retaining more students in college, if we are keeping people here in this region, I want to know what we are doing wrong and why we must change so fundamentally,” Prof Cunnane asked.

“We work for you, your communities, our regional economy and our society. We are delivering.”

He also called on the newly appointed Minister for Education and Skills Joe McHugh to review the Hunt Report “in light of the environment we find ourselves in today”.

“The reality is that the challenges this sector faces are very different from when the Hunt Report was published. The biggest challenges to us lies in a policy written in a different time for a different country,” he said.

In the course of his address, Prof Cunnane also revealed the results of the HEA’s Graduate Employment Survey of 2017, which show that only 5% of last year’s graduating class were looking for employment after graduation.

“This figure is particularly significant when compared to the national youth unemployment rate of 13.9%,” Prof Cunnane said.

“And it is not that people are going into poorly paid jobs in other parts of the country, or that they have to emigrate,” he added.

“The average salary for someone graduating from LIT last year was just over €26,000, with one third of those graduates on a salary of over €30,000 per year,” he added.

“About three quarters of last year’s LIT graduates are working in Limerick, Clare or Tipperary. Results like this do not happen by accident. They happen because the staff of LIT work hard to deliver an education that makes students as work-ready as possible. LIT graduates are plugged into the economy,” he told the class of 2018.

“This creates a virtuous cycle. You get good jobs, and employers invest here in the Mid-West because you have the skills, the knowledge and the attitude that the modern workplace needs.”

He noted that many of these ambitions and targets are set out in LIT’s Strategic Plan, launched this year, which puts it on a trajectory to become a Technological University.

The LIT conferring ceremonies will take place over five days in Limerick and Tipperary and will see 1,600 students graduate from five campuses.