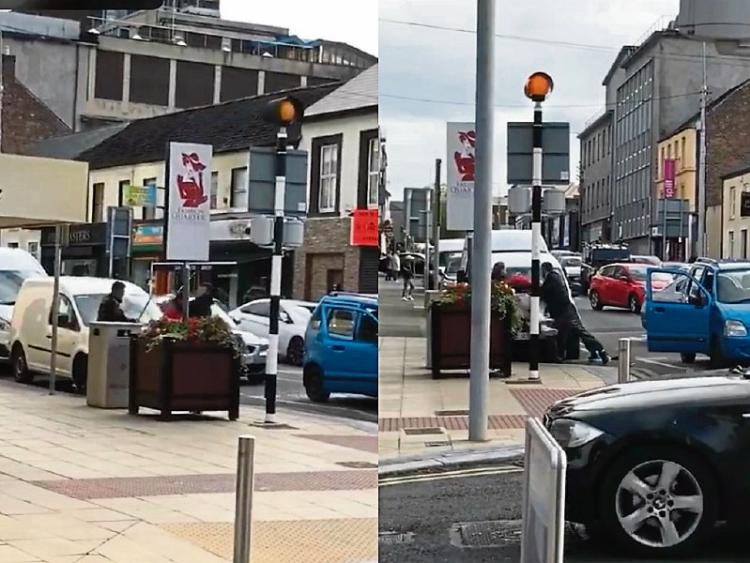 Two separate stills of the footage of brawl in Limerick city

GARDAI have arrested a man in connection with a large daylight brawl in Limerick city, in which a number of people were assaulted.

The incident occurred at the Roches Street and Catherine Street junction this Tuesday at around 1.30pm.

Video footage of part of the incident, obtained by the Limerick Leader, shows two men hitting another male with what appear to be metal pipes.

It appears that the male who was attacked with the weapons, who was wearing a red jacket, was also wrestling with a fourth man, as a number of shocked onlookers witnessed the vicious attack.

The man in the red jacket, who is told to “get off him”, is punched in his sides and punched in the face during the ordeal.

Traffic was at a standstill during the incident as one of the people involved in the incident had left their car at the crossing.

The video also shows that a woman attempted to intervene in the incident.

A spokesperson for An Garda Siochana said: “An investigation is ongoing into an incident that occurred this (Tuesday) afternoon at approximately 1.30pm on Roches Street where a number of persons were assaulted.

“One man is currently in custody detained under Section 4 of the Criminal Justice Act at Henry Street garda station. Investigations ongoing.”

Anyone with information in connection with the incident is urged to contact Henry Street garda station at 061 212400.