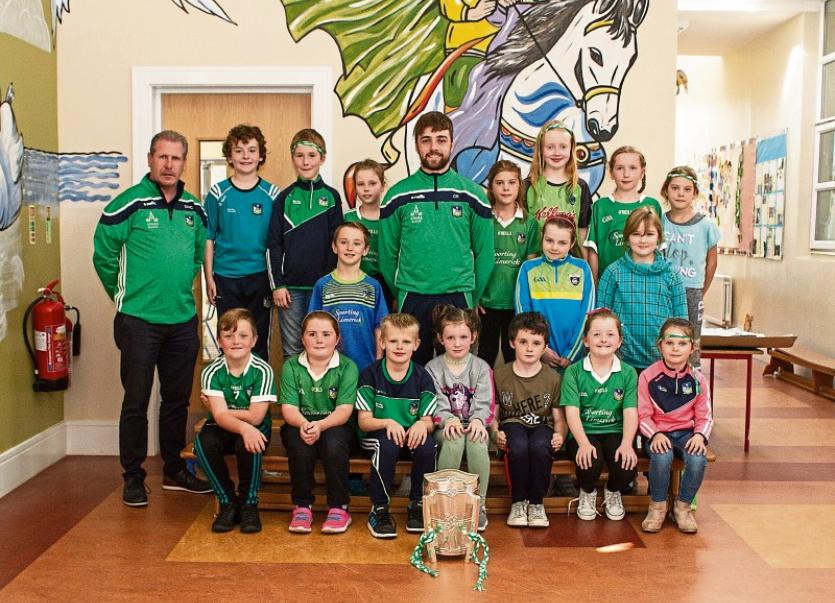 A video of it posted on Pallasgreen GAA’s Facebook page has been seen over 6,400 times. The boys and girls worked in all the players names, as well as other famous faces like JP McManus, Paul O’Connell and landmarks like King John’s Castle and Treaty Stone. One listen and you will be humming the words.

Colin said the welcome they got was “absolutely unbelievable”

“The effort they put into the song to fit everyone’s name in was class. It’s something I’ll remember for a very long time. I grew up there hurling with all my friends and winning school finals. It was something really special to walk into the school with Ger and the Liam MacCarthy – it’s what you dream of.

“I said to the kids I was one of ye before sitting down there looking up at Limerick hurlers gone by and it was a dream of mine to wear the green jersey. I would encourage everyone to keep trying no matter what. With some hard work and a bit of luck some of them lads in Nicker will be bringing the Cup back in a few years time,” said Colin. Ger said himself and Colin were “very touched” by it.

“The song was amazing. When we walked into the room, saw the children and how much it meant to them to see the Cup - it was special. They went to fierce trouble with the song, Karen is very musical. We got great receptions in Barna and Garrydoolis NS as well. It was a fantastic day,” said Ger. Karen Franklin, Nicker NS principal, said all the praise must go to the talented pupils.

“We were inspired by The 2 Johnnies who did a Tipp version. We brainstormed about all the good things about Limerick – all the personalities, history, places, music, players, sports and sayings. One child would come up with a line and then what rhymes with that. It was all the children’s own work,” said Ms Franklin. She said the All-Ireland win has created “huge positivity”.

“The children’s parents are delighted with the song. We didn’t think anything of the song until the team visited. David McGuinness recorded it and put it on the Pallasgreen GAA Facebook page. The next day the kids were telling me about all the hits.

“They are delighted and the fact that it was their own composition makes it very special. We’re very proud of Colin and Ger does such unbelievable work in the parish,” said Karen.